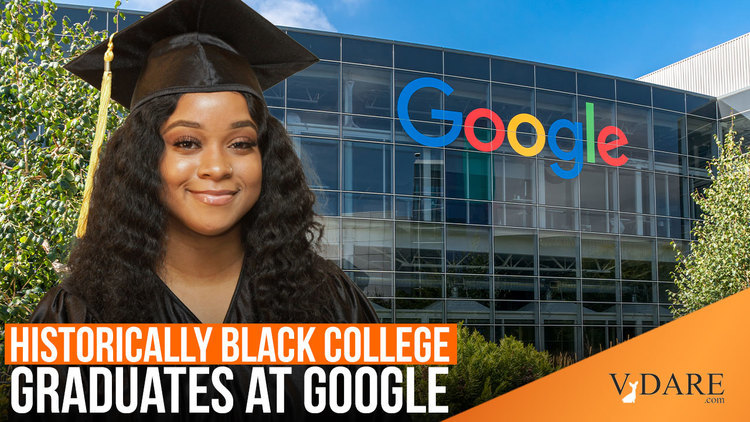 Google's Diversity Paradox: No Amount Of Wokeness Can Make Them Hire An HBCU Graduate As An Engineer

There are no companies on Earth more Woke than the big Silicon Valley software giants; and among them, none is more Woke than Google. A whistleblower told Breitbart News in 2017 that senior leaders at Google, quote, "focus on diversity first and technology second."

A problem there is that in the work at the heart of these firms' business models—writing software—some races perform much better than others. East Asians do it best, with whites and South Asians considerably behind. Not many blacks can do it to a high standard.

So there's been a contradiction lurking there waiting to explode.

Well, it may have exploded. Breitbart reports, March 21st, that a black female employee is suing Google for engaging in "systemic racism" against her. The lady alleges inter alia that Google has, quote, "never, and I mean f***ing never," hired a student from a historically black college into a tech role.

@Google needs to move into the 21st century and reject racism seriously, instead of just using the guise of diversity, actually putting it into practice. This is truly sad: https://t.co/oz7dMHl6Me

She has hired master race-grievance attorney Benjamin Crump to represent her, so this should be a real circus show. Break out the popcorn!