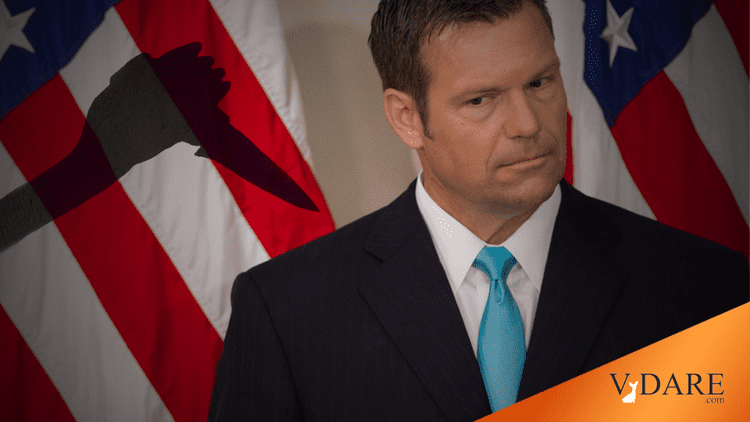 A shady PAC plans to run a $3 million ad campaign against Kansas Senate candidate Kris Kobach. The newly formed Plains PAC [Email them] is putting out ads that claim Kobach is a “white nationalist” and a failed candidate [Kobach target of ‘white nationalist’ Senate ads, by Korinne Griffith, KSN, July 8, 2020].

Its executive director is CJ Grover [Tweet him], a long-time aide to establishment Republicans. Kobach calls the PAC an attack dog for the Republican establishment. “Mitch McConnell and his DC cronies should keep their lies and dark money out of the Kansas Senate race,” Kobach spokeswoman Danedri Herbert said in a statement.

“We are equally disgusted that Plains PAC has also likely broken the law. The PAC’s executive director was a Kansas state employee in the Attorney General’s office until yesterday. The group formed on July 1, and the ads and media planning were in process before the executive director left state employment. Groups that lie and break the law can’t be trusted.”

This PAC’s efforts beg the question: Why is the GOP establishment pouring millions into defeating Kobach, the frontrunner in the Kansas Senate primary?

There are two reasons: one, they think Kobach is unelectable—even though he previously won two statewide races. This argument is further invalidated by the establishment backing poorly polling candidates in other Senate races. Arizona Sen. Martha McSally and Georgia Sen. Kelly Loeffler both look to lose their respective races, yet no one in the establishment seems concerned by their electability.

Second, they hate his immigration patriotism, which the establishment characterizes as “white nationalism.” “Kansas Republicans support President Trump and his positive vision for America, but not Kobach's consistent affiliation with a toxic ideology explicitly rejected by the President and Kansans of all stripes,” Grover told CNN [GOP group to launch multimillion-dollar ad campaign to stop Kobach in Kansas Senate primary, by Alex Rogers and Manu Raju, CNN, July 7, 2020].

Trump won on Kobach’s agenda in 2016. The establishment’s agenda, which is represented by Kobach’s chief rival Rep. Roger Marshall, was soundly defeated in 2016. Establishment pressure continues to be exerted on Trump to ditch one of his most loyal supporters. The president reportedly told the Club for Growth in June to stop running anti-Marshall ads. The conservative group complied [GOP establishment boosting Kansas congressman’s Senate bid, by John Hanna, Associated Press, July 8, 2020].

Kobach can still win the primary and the general election. It’s just gonna take him defeating the craven establishment.