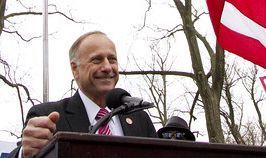 This is a major loss for the immigration patriot cause. King has bravely stood up for the Historic American Nation throughout his many years in Congress--which is why the Republican Establishment wanted him gone.

Many outlets, particularly Conservative Inc. ones, will likely try to spin this as rural Iowa rejecting “xenophobia” and “white nationalism.” But in reality, King was simply defeated by the money and power of the GOP Establishment.

CNN analyst Chris Cillizza points out that King sailed to victory in past contests, despite his supposed “xenophobia.” Previous reports have shown that many of King’s constituents supported his allegedly controversial statements in defense of western civilization.

Cillizza blames King’s defeat on the loss of his committee assignments.

What that meant for King was that he, well, just didn't have that much to do in Congress -- and, more importantly -- had zero influence either within his party or among the broader Congress.

King couldn't really influence legislation without committee assignments. When a piece of legislation was put on the floor, all he could do was vote up or down.

And it's that lack of efficacy that doomed him, as his opponents -- both Feenstra and outside groups -- hammered away on the idea of King as powerless…

By the end of the campaign, voters had been told time and again that King was, effectively, collecting a six-figure salary while not doing all that much. And well, people didn't like that.

The entirety of the Republican Establishment and Conservative Inc. backed King’s opponent. Even though King is strongly pro-Israel and the most vigorous pro-life lawmaker in Congress, the Republican Jewish Coalition and National Right to Life supported Feenstra.

It is tragic that King was defeated, but his ideas were not vanquished in Iowa. The election was not about King’s immigration patriotism—it was about his lack of committee assignments, the result of GOP Establishment’s cowardice and  continuing deference to the Cheap Labor Lobby.