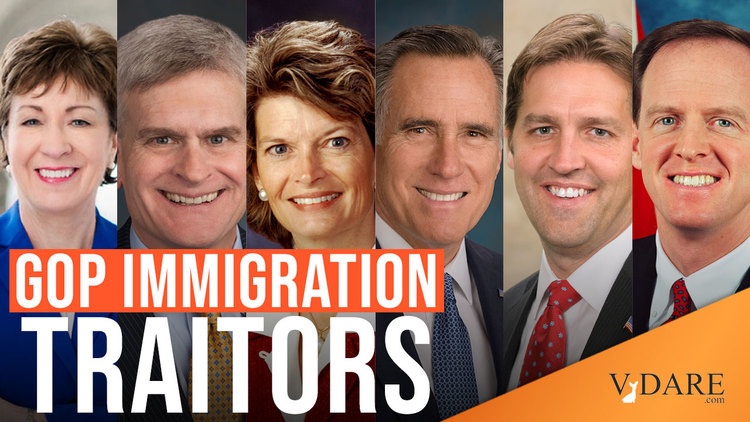 The Senate agreed to consider the case against Trump by a 56-44 vote following hours of arguments by the former president’s legal team and House impeachment managers. A total of six Republicans – Sens. Susan Collins of Maine, Bill Cassidy of Louisiana, Lisa Murkowski of Alaska, Mitt Romney of Utah, Ben Sasse of Nebraska, and Pat Toomey of Pennsylvania – sided with Democrats in calling for the trial to proceed.

What is grandly called “impeachment” is of course simply an attempt to lynch President Trump for having won the 2016 election and for being demonstrably more popular than anyone else with the hated Flyovers.

In Immigration Traitors Are Party Traitors (And GOP Minority Outreach Is Disastrous!) I took a look at the immigration record of the GOP Congresscritters who voted to give the Democrats veto power over Republican House organization and to muzzle a fellow Republican, Marjorie Taylor Greene.

I found that these were usually the worst on immigration in their Delegations. Also that a disturbing number were the beneficiaries of GOP Minority Outreach.

Senator Sasse's relatively good grade is a surprise. He has long been vociferously anti-Trump and started poorly on immigration. Sadly, his Senatorial colleague Deb Fischer, who started well, celebrated her 2018 reelection by to dropping to D- from a career ranking of A-. Looks like Big Ag has gotten to her.

Overall though, the pattern is clear. Immigration Traitors tend to be Party traitors.

Also, the Senate is choked with scum.

And that is before contemplating Mitt Romney.