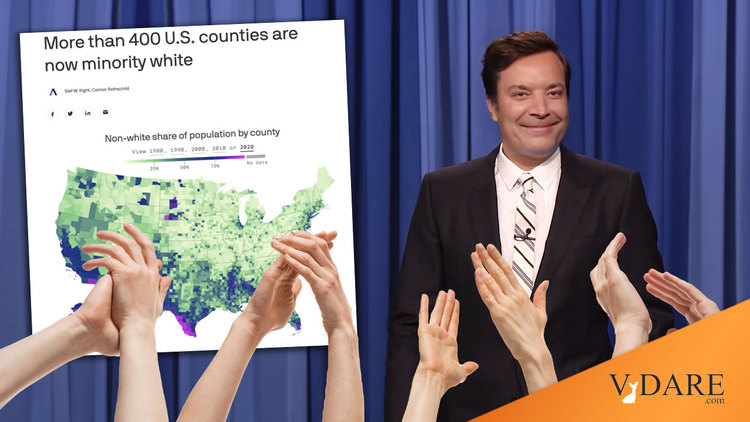 The Great Replacement is not only real, but celebrated with cheers on The Tonight Show with Jimmy Fallon… no, not just cheers, but wild applause.

This is totally normal and not a little bit weird at all. pic.twitter.com/E0xkk79nAA

White, non-Hispanic Americans now account for less than six in 10 people in the U.S. — a more precipitous drop over the past decade than experts expected — and they’re no longer the racial-ethnic majority in 13% of U.S. counties.

The big picture: America’s identity is shifting with its population.

By the numbers: White, non-Hispanic Americans are about 58% of the U.S. population, according to data from the 2020 census released on Thursday. That’s lower than the estimates of 60%, and it compares with about 64% in 2010.

Be smart: The pace of the decline may reflect a combination of actual change plus new ways the Census Bureau is asking about demographic identity to capture Americans who identify with more than one race.

The intrigue: Nonwhiteness and diversity are actually two different measures. The Census also has developed a way to calculate diversity based on how likely it is that two people chosen at random within a boundary will be of different races or ethnicities.

Yes, The Great Replacement was greeted with wild applause on the Jimmy Fallon hosted Tonight Show. It went from conspiracy theory to late night punchline, complete with mandatory “applause now" signage and an audience more than eager to shower the news of whites impending minority status in the USA with joy.

The Great Replacement In America
<< Previous
Next >>
LATEST