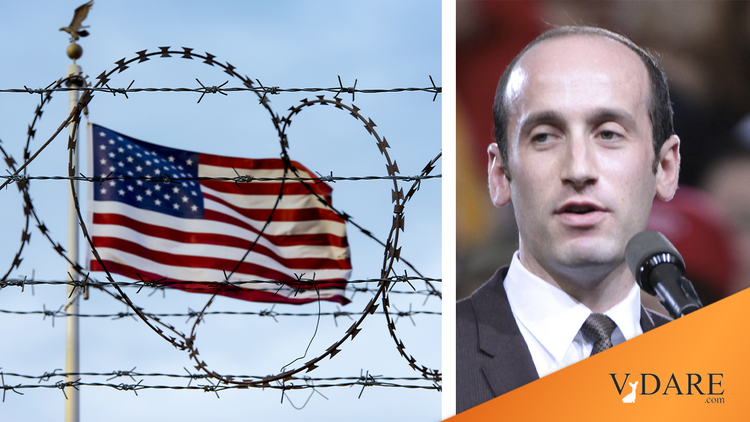 See also: "Basically The Plot Of The Purge"—Leftists Hating On Stephen Miller (And VDARE.com)

The architect of Donald Trump’s hardline immigration policy, senior adviser Stephen Miller, is said to have a drawer full of executive orders ready to be signed in “shock and awe” style if Trump is re-elected.

The former homeland security department chief of staff Miles Taylor said this wishlist was reserved for the second term because it included policies that were too unpopular for a president seeking re-election.

This links to a Tweet of an interview with the former Anonymous whistleblower who is a less reliable source now that we know who is than when he was anonymous. The NYT lied about his place in the Administration, and there's no reason to believe he's telling the truth about anything.

The 35-year-old has managed to keep his position as a senior adviser to the president after being exposed for having an affinity for white nationalism and becoming synonymous with unpopular Trump administration policies such as family separation – when thousands of children were taken away from their parents at the southern border to deter would-be migrants. Three years later, more than 500 kids are still yet to be reunited with their parents.

The "affinity for white nationalism" links to a Guardian story about an SPLC "exposé" which said that Miller read VDARE.com. (We're a news source, like the Guardian itself, although we didn't side with the Soviet Union or North Vietnam in the Cold War.) See Yes, SPLC (And Ayatollah Ahmari), Of Course Stephen Miller Reads VDARE.com—Just Not Enough.

The Guardian goes on

Jean Guerrero, the author of the Miller biography Hatemonger, told the Guardian: “There’s a number of things they have been cautious about because of the legal and political risks in the first term and I think that in a second term you would see Stephen Miller get much freer rein when it comes to his wishlist of items.”

Legal and political risks can be taken to mean the various failed coup/impeachment attempts: Mueller, impeachment, the entrapment of General Flynn, the Michael Cohen prosecution, etc.

Those items are expected to include attempting to eliminate birthright citizenship, making the US citizenship test more difficult to pass, ending the program which protects people from deportation when there is a crisis is their country (Temporary Protected Status) and slashing refugee admissions even further, to zero.

Miller wields an unusual amount of power in the administration, particularly the homeland security department (DHS), which is tasked with responding to threats from natural disasters, cybersecurity and terrorism. It is also the base of the country’s immigration agencies, which Miller has zeroed in on with a relentless focus.

He was a driving force behind a purge of homeland security officials early last year, which has left some positions in the department vacant or held by temporary officeholders for more than a year. He has even been known to intervene in specific immigration cases by contacting low-level staffers.

Then they go on about Miller has this "affinity" which as I pointed out, meant he emailed TWO stories by VDARE.com writers to a former conservative writer who turned on him.

In the wake of the report, seven Trump officials in anonymous interviews with the Daily Beast said the story didn’t endanger Miller’s position and two people laughed at the suggestion.

And of course those people are anonymous, too, if they exist. Who can believe either a Daily Beast writer, or a Trump official willing to talk to one?

But the main point about this is that Miller's alleged second-term agenda is what Americans voted for in the first term. (See Immigration Reform That Will Make America Great Again, Trump's immigration plan [PDF], August 16, 2015.) Ending birthright citizenship, TPS for people whose countries had an earthquake a generation ago, and cutting refugees to close to zero are all popular things that can and should be done, and should have been done in Trump's first hundred days.

Steve Bannon said that Trump Administration's "original sin" was that they "embraced the establishment". It would be nice to see them stop doing that in the second term.