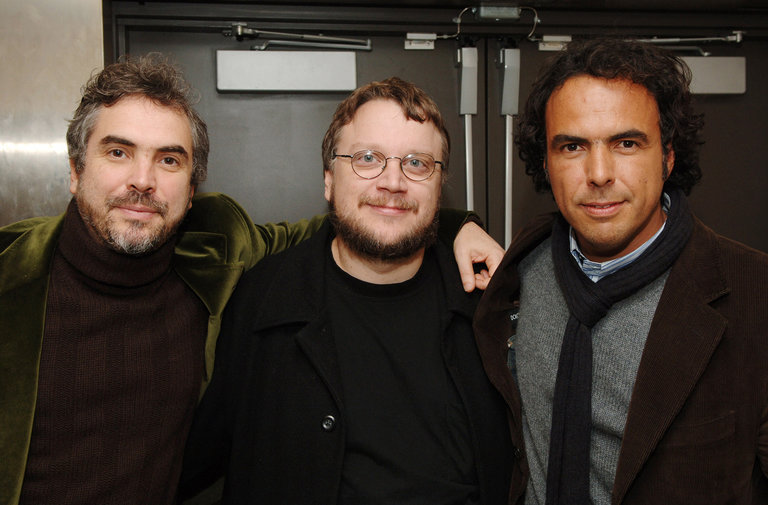 … If Mr. del Toro [center] wins the best director award at the Oscars, it will be the fourth time a filmmaker from Mexico has taken the prize in five years, all with unconventional films.

In short, they got a lot of early experience in the Mexican film & TV industry. But then they hit career ceilings south of the border due to the poor fit between the Three Amigos’ Oscarish artsiness versus the backward tastes of Mexican audiences. So they quickly transitioned to successful Hollywood careers, aided by skilled technicians they brought with them from the Mexican film industry, such as cinematographer Emmanuel Lubezki.

The remarkable successes of these directors — and the ways in which they’ve made their heritage part of more-universal movies — is a reminder of how ethnic and cultural diversity can enrich the movie industry.

Strikingly, the Three Amigos from Mexico have done virtually nothing to help the careers of Mexican-Americans (i.e., people of Mexican descent who have lived in the US at least since adolescence), however, the most underrepresented demographic in Hollywood, but that concept never dawns on the NYT:

Hopefully by next year’s award season, audiences will see it in front of the camera as well.

Just don’t expect the Three Amigos to hire many mestizo Mexican-Americans for their movies.

I wrote about Del Toro’s The Shape of Water here:

“The Shape of Water” is Mexican Conquistador-American Guillermo del Toro’s art-directed-within-an-inch-of-its-life Oscar contender about how a heroic Coalition of the Fringes teams up to thwart the Evilest Evil White Man Ever from stopping a saintly disabled woman from consummating her Amphibious Marriage with a creature from the black lagoon.