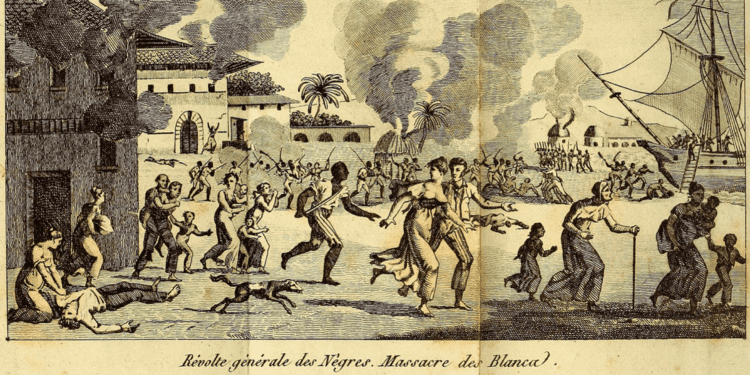 Haitians And The Devil

Pat Robertson is in trouble for saying that Haitians

"[G]ot together and swore a pact to the Devil and said, We will serve you if you'll get us free from the French. True story. And so the Devil said, Okay, it's a deal. And, uh, they kicked the French out. You know, the Haitians revolted and got themselves free, but ever since they have been cursed by one thing after another."

Of course, Pat Robertson isn't very influential,(Kathy Shaidle says"Pat Robertsons only viewers are reporters hoping he'll say something stupid") and I never had much time for the theory that that natural disasters are a judgment on whoever they they happen to, but I understand that ministers feel differently about that sort of thing. But where did he get this weird idea, I thought? Turns out that it's what Haitians believe themselves:

According to Haitian national history, the revolutionary war was launched on the eve of a religious ceremony at a place in the north called Bwa Kayiman (Bois Caiman, in French). At that ceremony on August 14, 1791, an African slave named Boukman sacrificed a pig, and both Kongo and Creole spirits descended to possess the bodies of the participants, encouraging them and fortifying them for the upcoming revolutionary war. Despite deep ambivalence on the part of intellectuals, Catholics, and the moneyed classes, Vodou has always been linked with militarism and the war of independence and, through it, the pride of nattional sovereignty.

The [Haitian] Pentecostal Church demands active rejection of such Afro-Creole traditions and regards them as satanic practice. Sermons and literature about Haiti urges missions to "pull down strongholds" and aim efforts at destroying working Vodou temples in various ways. In group rituals of prayer and fasting, the Pentecostals marched through public space performing exorcisms at spots considered sacred in Vodou and recast as satanic for Pentecostals.

One such "crusade" ceremony has had a lasting resonance for Haitian evangelicals in New York. A group of Haitian Pentecostal pastors based near Port-au-Prince launched a serious critique of the Haitian government and indeed of Haitian nationalist mythology, when they marched on August 14, to the reputed site of the original religious ritual in 1791 when the slaves of St. Domingue vowed to fight for freedom. The pastors intended to exorcise the Vodou spirits who still governed the site and "win" the space "for Jesus."

In a complicated view that blames the Catholic Church for blessing the slave market and racializing evil in terms of African's skin, the leaders of the "Bois Caiman for Jesus" crusade blamed slavery for causing Africans to turn to Satan as their divine protector. In invoking African and Creole spirits to possess the religious leaders who had attended, Boukman had made a "pact with the devil" and dedicated Haiti to serve Satan. It was this unholy alliance that had been responsible for Haiti's subsequent 200 years of misery. [Emphasis added.]

The idea of the crusade was to undo Boukman's pact with the devil and to halt Haiti's economic and political downward spiral by turning Haiti into a "favored nation" of God. Video crews and reporters captured the spectacle and relayed the news of the exorcism to Port-au-Prince and into the diaspora (McAlister, 2000). [Catholic, Vodou, and Protestant Being Haitian, Becoming American—Religious Pluralism, Immigrant Incorporation, and Transnationalism, by Elizabeth McAlister and Karen Richman in Immigration and Religion in America: Comparative and Historical Perspectives, By Richard D. Alba, Albert J. Raboteau, and Josh DeWind]