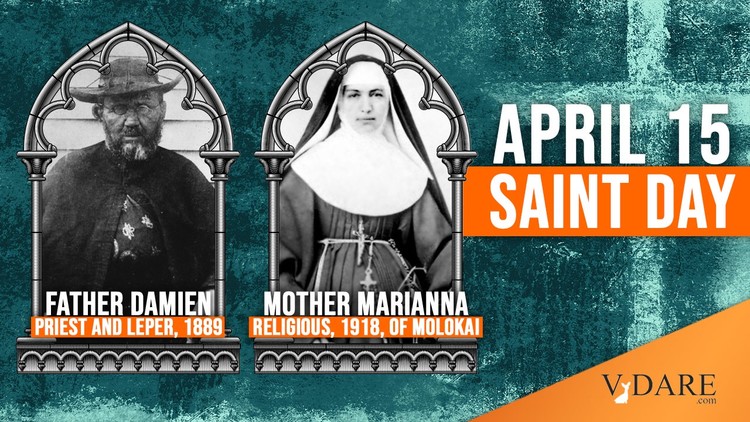 Besides Good Friday, which is by definition not happy, it's also Father Damien and Mother Marianne Day, so have a happy that!

At least, it is in the U.S. Episcopal Church calendar. In the Catholic calendar—and both were Catholics—it's May 10.

Both served in the Hawaian leper colony of Molokai. Damien contracted the disease and died on April 15, 1889.

I've gotten to know a lot of obscure Christian Saints since I started this education project, and I must say I am deeply impressed how many lived lives of unsung selfless sacrifice. (For example, here.)

Oh, and it's also the first night of Passover.

It has now become a multicultural must to step on Christmas by never mentioning it except in connection with other “holidays,” notably Hanukkah, aptly described by American Heritage's Frederic Schwarz (December 2000) as the “Jewish Kwanzaa.”

Somehow, however, the MSM neglects to provide the nearest Saint's day in the Christian calendar to each year's Rosh Hashanah, Yom Kippur and Passover—there are a lot of Saints! So it has become a VDARE.com service (as so often) to fill the gap.

VDARE.COM wishes ALL our readers a Happy. We mean it.

War On ChristmasChristophobiaWar on Easter
<< Previous
Next >>
LATEST