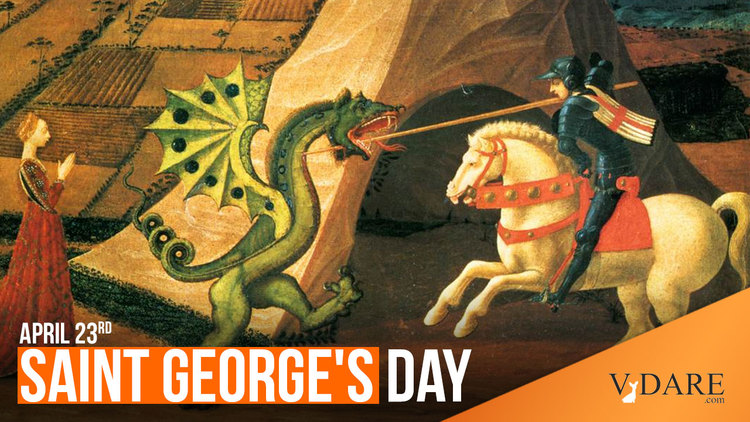 Happy St George's Day (Not That One!)

Today, April 23, is St. George's Day, as well as (possibly) the 457th birthday of William Shakespeare. 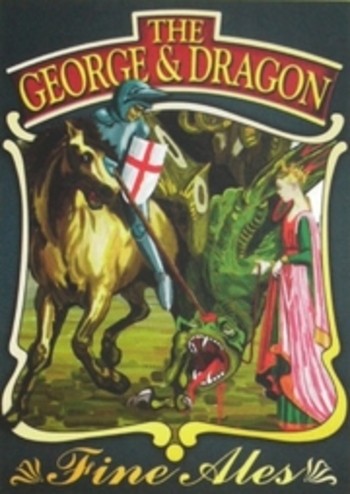 A few years ago, I did a column in which I quoted Mark Steyn on what Muslim immigration has done to St. George's memory in the country of which he is the Patron Saint:

April 23rd is England's unofficial national holiday - unofficial because, under Blairite devolution, Scotland, Wales, Northern Ireland and selected Muslim neighborhoods of Greater London, Yorkshire and the Midlands are all nations, but English nationalism is a dark demon that must never be loosed upon the land. At the turn of the century, Tony Blair's ministry was gung-ho for Celtic nationalism and parliaments in Edinburgh, Belfast and Cardiff, but for England all the government was prepared to offer was a subdivision into artificial regions that commanded no loyalty and could therefore be safely entrusted with "regional assemblies".

Even this was abandoned, and in the years after 9/11 English nationalism was further complicated by the fact that, unlike St Andrew, St Patrick and St David, the patron saint of England had a starring role in the new clash of civilizations: St George's was the crusader cross, the banner England's soldiers took across a continent to reclaim Jerusalem for Christendom.

These days the traffic from Islam to Christendom is mostly the other way, and in the multicultural utopia St George is a problematic figure. In the "Islamic Republic of Tower Hamlets" — the heart of London's East End, where one sees more covered women than in Amman, where male infidel teachers of Muslim girls are routinely assaulted, where police turn a blind eye to misogyny, Jew-hatred, and gay-bashing for fear of being damned as "racist" - I noticed a year or two back that one gay pub had attracted particular ire: patrons were being abused, and beaten, and, in one case, left permanently paralyzed.

The hostelry that had so attracted the attention of the local Muslim youth hung a poignant shingle: The George and Dragon. It's one of the oldest and most popular English pub names. Another George and Dragon just across the Thames on Borough High Street has been serving beer for at least half a millennium. But no one would so designate a public house today. The George and Dragon honors not just England's patron saint but the most famous story about him, brought back by the Crusaders from their soldiering in the Holy Land: In what is now Libya, Saint George supposedly made the Sign of the Cross, slew the dragon, and rescued the damsel.

Within living memory, every English schoolchild knew the tale, if not all the details — e.g., the dragon-slaying so impressed the locals that they converted to Christianity. But the multicultural establishment slew the dragon of England's racist colonialist imperialist history, and today few schoolchildren have a clue about Saint George. So that pub in Tower Hamlets turned gay and Britain celebrated diversity, and tolerance, and it never occurred to them that, when you tolerate the avowedly intolerant, it's only an interim phase. There will not be infidel teachers in Tower Hamlets for much longer, nor gay bars.[More]

Of course, if you were to search this site for the words "St. George" in the past year, you'd find that most of the references are to the allegedly sainted George Floyd: see The Canonization of St. George of Floyd by Steve Sailer. 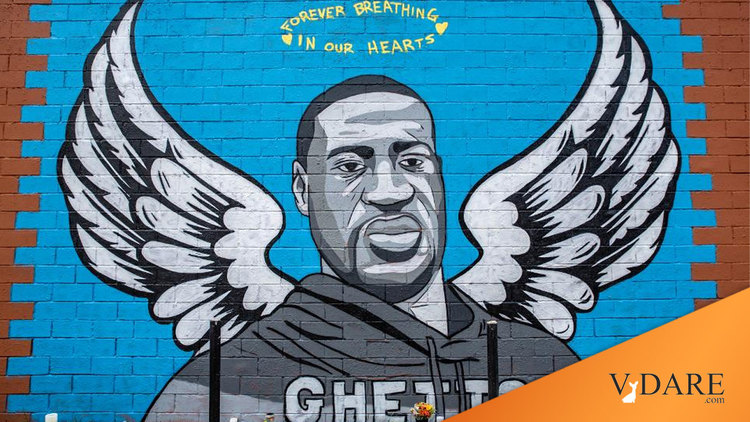 Gunman, drug addict, and counterfeiter St. George of Floyd doesn't have his own day yet, but stranger things have happened.