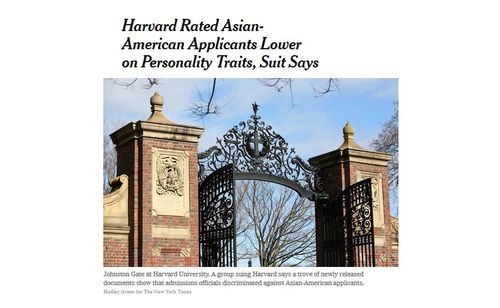 Harvard to Its Asian Rejects: It's Not You, It's Your Personality

Harvard consistently rated Asian-American applicants lower than others on traits like “positive personality,” likability, courage, kindness and being “widely respected,” according to an analysis of more than 160,000 student records filed Friday by a group representing Asian-American students in a lawsuit against the university.

Asian-Americans scored higher than applicants of any other racial or ethnic group on admissions measures like test scores, grades and extracurricular activities, according to the analysis commissioned by a group that opposes all race-based admissions criteria. But the students’ personal ratings significantly dragged down their chances of being admitted, the analysis found. …

The suit says that Harvard imposes what is in effect a soft quota of “racial balancing.” This keeps the numbers of Asian-Americans artificially low, while advancing less qualified white, black and Hispanic applicants, the plaintiffs contend. …

Many Ivy League schools, not just Harvard, have had similar ratios of Asian-American, black, white and Hispanic students for years, despite fluctuations in application rates and qualifications, raising questions about how those numbers are arrived at and whether they represent unspoken quotas.

Ron Unz pointed out a number of years ago that Harvard et al’s flat percentage of Asian students at a time when the number of Asians was soaring, as were Asian test scores, suggested discrimination.

“It turns out that the suspicions of Asian-American alumni, students and applicants were right all along,” the group, Students for Fair Admissions, said in a court document laying out the analysis. “Harvard today engages in the same kind of discrimination and stereotyping that it used to justify quotas on Jewish applicants in the 1920s and 1930s.” …

As we all know, the 1922 Harvardocaust that capped Jewish admissions until the 1950s was almost as bad as the same thing that was happening at the Los Angeles Country Club.

Seriously, my impression is that Asians tend to have fine personalities.

As did Jews in 1922. On the other hand, there can be the problem of too much of a good thing. If Harvard was 60% Asian, would even Asians find it as cool?

That of course was the same problem as Harvard faced in 1922: if Harvard became 60% Jewish during the 1920s, would Jews still think Harvard was the bee’s knees?

Jews didn’t seem to want to go to Jewish colleges, the way they wanted to go to Jewish hospitals or join Jewish country clubs. Instead, judging by the 1920s advertisements, such as this J.C. Leyendecker illustration, everybody in 1922 seemed to want to send their sons to ancient colleges with Stutz Bearcat-driving, raccoon coat-wearing Joe College types.

Similarly, Asians haven’t started many colleges in the U.S. either. Asians tend to want to send their kids to colleges full of the kind of people who get their wedding announcements in the New York Times, which are colleges that aren’t majority Asians.

In court papers, Harvard said that a statistical analysis could not capture the many intangible factors that go into Harvard admissions.

It’s an art, not a science! Yeah, maybe. My impression from Robert Klitgaard’s 1985 book Choosing Elites that gave an inside view of the statistical analyses Harvard performed in the 1970s to optimize admission policies to the affirmative action era is that Harvard crunches the numbers very hard.

Harvard is run by smart, reasonably ruthless people who understand the value of Harvard’s billion dollar brand name. Harvard will do what it takes to protect the brand. If that includes discriminating against Asians, well …

… They compare Harvard’s treatment of Asian-Americans with its well-documented campaign to reduce the growing number of Jews being admitted to Harvard in the 1920s. Until then, applicants had been admitted on academic merit. To avoid adopting a blatant quota system, Harvard introduced subjective criteria like character, personality and promise. The plaintiffs call this the “original sin of holistic admissions.”

They argue that the same character-based system is being used now to hold the proportion of Asian-Americans at Harvard to roughly 20 percent year after year, except for minor increases, they say, spurred by litigation. …

Harvard said it was implausible that Harvard’s 40-member admissions committee, some of whom were Asian-Americans, would conclude that Asian-American applicants were less personable than other races.

University officials did concede that its 2013 internal review found that if Harvard considered only academic achievement, the Asian-American share of the class would rise to 43 percent from the actual 19 percent. After accounting for Harvard’s preference for recruited athletes and legacy applicants, the proportion of whites went up, while the share of Asian-Americans fell to 31 percent. Accounting for extracurricular and personal ratings, the share of whites rose again, and Asian-Americans fell to 26 percent.

What brought the Asian-American number down to roughly 18 percent, or about the actual share, was accounting for a category called “demographic,” the study found. This pushed up African-American and Hispanic numbers, while reducing whites and Asian-Americans. The plaintiffs said this meant there was a penalty for being Asian-American.

But, the plaintiffs said in their motion Friday, there was no further insight, because, “Harvard killed the study and quietly buried the reports.”

In a heavily redacted section, the plaintiffs describe how Harvard and 15 other elite schools share notes about the race of admitted students at a meeting of the Association of Black Admissions and Financial Aid Officers of the Ivy League and Sister Schools every year. The court papers portray them as a sort of secret society of admissions officers exchanging information about race, a sensitive aspect of admissions.

Harvard’s class of 2021 is 14.6 percent African-American, 22.2 percent Asian-American, 11.6 percent Hispanic and 2.5 percent Native-American or Pacific Islander, according to Harvard’s website.