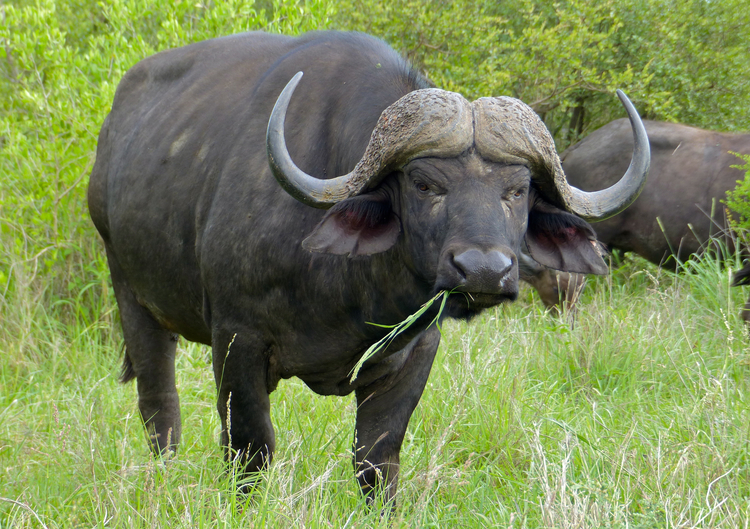 Henry Harpending On How Not To Hunt A Cape Buffalo

Greg Cochran and Henry Harpending now have a website up for their new book The 10,000 Year Explosion: How Civilization Accelerated Human Evolution.

They've posted four outtakes from the book that didn't make the final draft for reasons of length. Here's part of a section intended to help readers understand what it must have been like for early humans to hunt big game with just spears:

Probably most of our readers don’t have personal experience with old-fashioned, Pleistocene-style big game hunting. The only place in which it is still possible - not for much longer, at that – is Africa, where the big game had a chance to adapt as mankind gradually became formidable hunters and thus managed to survive until today. Without that experience, it’s hard to realize how remarkable Neanderthals were, how difficult hunting bison and elk with thrusting spears must have been. It’s not easy to appreciate the risks stone-age hunters had to take when they went after mammoths, rhinos, or Cape buffalo: it’s not exactly safe today, even with modern weapons. One of us, however (Henry Harpending) does have that experience, and the following note gives a flavor of what it’s like – particularly when you don’t have the faintest idea what you’re doing.

Encounter with a Buffalo

When I (HCH) was a graduate student in the 1960’s I spent a year and a half in the northern Kalahari desert doing fieldwork with !Kung Bushmen, foragers who lived by foraging wild foodstuffs and hunting game animals. With several other graduate students we had a base camp near the border with Southwest Africa (now Namibia) about 100 miles south of the Caprivi Strip on the northern border of Botswana. The nearest source of supplies was a two-day trip from their camp by four wheel drive truck.

Several weeks after the rainy season ended there were reports in the neighborhood of a cape buffalo that was harassing people and animals. Often older males lose rank and leave herd to wander by themselves, angry and uncomfortable. They are a threat to people and stock, especially horses.

We were out of meat in our camp, and so with the confidence and foolishness of youth we decided to hunt down the buffalo. We had visions of steaks and chops as well as many pounds of dried meat for travel rations and dog food. At that time permits for Buffalo were only a few dollars from the Botswana game department, and we had several. Although there were stories of Buffalo being aggressive and dangerous to hunt, to my eye they were simply large cattle. Bushmen never hunted them with their poison arrow and spear technology, but they too were naïve and had great faith in our high-powered rifle.

One morning we set off to where the animal had last been reported. The party was a colleague, several young Bushman males, and myself. We soon picked up its tracks and for several hours followed its wanderings through the low thorny scrub. To me the tracks looked exactly like those of a cow but the Bushmen never hesitated. When it was apparent at one point that there were no tracks at all in view I asked, and the Bushmen told me that there was no point in following the tracks since they knew exactly where it was going. We often saw this hunting with Bushmen­–they used actual tracks as a guide but knew the habits of animals so well that they often proceeded on their own to pick up actual tracks later on.

This went on for hours until, suddenly, a young man grabbed my shoulder and said “there it is.” I looked long and hard until I saw it, well camouflaged behind several yards of thick brush, sideways, staring hard at us with its bright pig eyes. It was about forty yards away.

As I brought the rifle up I was dismayed to realize that it still had a powerful telescopic sight. I should have removed it and use open iron sights in thick bush but I had forgotten. With the magnification of the scope I saw a black mass surrounded by brush. It took a moment to locate the front legs, then the chest. Oriented, I aimed and fired. “Bang-whump”, the bang from the rifle and the whump as the bullet struck the buffalo. He jerked a little, then simply stood there staring at me. “Bang-whump, bang-whump” as I fired two more rounds.

Now he tossed his head and snorted, then started running toward us. Buffalo charge with their nose high, only lowering their head to use their horns on contact. I fired one more round at the charging animal, head on, simply pointing at him because he was so close, then turned and ran. We discovered later that the bullet had struck his shoulder, ricocheted off his scapula, and exited through the skin on his side. It certainly didn’t slow him down at all: I might as well have been shooting at a railroad locomotive.

There were three of us running away now from the charging animal: my colleague, our camp dog, and myself.

You can find out what happened here.

To see how tough cape buffalo are, at the bottom of their excerpt is a Youtube of the now-famous "Battle at Kruger" video of a baby cape buffalo's encounter with hungry lions and crocodiles.