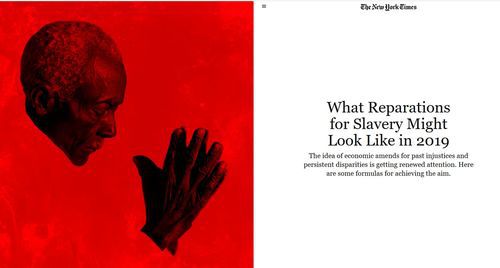 The idea of economic amends for past injustices and persistent disparities is getting renewed attention. Here are some formulas for achieving the aim.

… For every dollar a typical white household holds, a black one has 10 cents. It is this cumulative effect that justifies the payment of reparations to descendants of slaves long dead, supporters say. …

After all, there couldn’t possibly be any other explanations for this gap.

Taking account of compounding interest and inflation, Mr. Darity has put the present value at $2.6 trillion. Assuming roughly 30 million descendants of ex-slaves, he concluded it worked out to about $80,000 a person.

To get a sense of the scale, consider that the United States budget this year is $4.7 trillion.

Is the Reparations Debate intended to torpedo the anti-reparations Bernie Sanders campaign for the Democratic nomination?

Sanders has thought really hard over the years about what’s the maximum leftist economic platform that could possibly get to 270 Electoral Votes. And Reparations definitely isn’t part of that platform. But why should leftists listen to Bernie when they can listen to Ta-Nehisi?