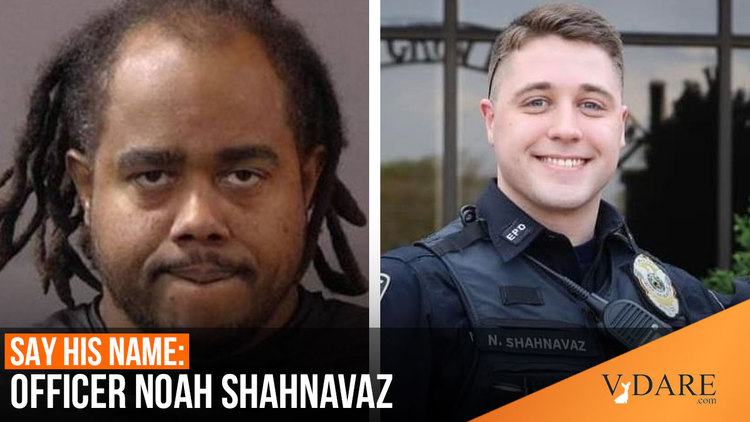 Career black criminal, who served a 25-year prison sentence for trying to murder an Indianapolis police officer in 2006 (and created raps about murdering police), fires 36 rounds at a white rookie police officer, killing him.

Instead, Elwood Officer Noah Shahnavaz is dead, and his murder by a black career criminal is barely news in the state of Indiana, let alone a nation where for more than two years post–George Floyd, we have been told innocent black males are being targeted by racist police in a country governed by pervasive white privilege, systemic inequality, implicit bias, and police brutality.

His name is Officer Noah Shahnavaz.

ANDERSON, Ind. — A man accused of fatally shooting an Indiana police officer during a traffic stop had made a song about killing an officer, investigators said Monday.

Carl Boards II was charged with murder and other crimes, a day after Elwood Officer Noah Shahnavaz was gunned down Sunday morning in Madison County, about 50 miles northeast of Indianapolis.

The 24-year-old officer was shot in the head after stopping Boards’ car. Investigators found 36 rifle bullet casings and damage to the patrol car’s hood, windshield and driver’s door.

Shahnavaz’ gun was still in its holster when he was taken to a hospital, Richard Clay of the Indiana State Police said in a court filing.

Boards, 42, owns a barber shop in Marion, Indiana. Police went to the shop and interviewed a man who lives in an apartment above the business.

The man indicated that Boards “made a recorded song making statements that if he was ever caught by police that he would kill them,” Clay said.

Boards was released from parole a year ago. His criminal record goes back to 1999 and includes convictions involving guns and drugs, Clay said.

It wasn’t immediately know [sic] if Boards has an attorney yet who could comment on the allegations.

Shahnavaz served in the U.S. Army for five years before becoming a police officer about a year ago.

“His dream was to serve others and we are proud of what he accomplished in such a short time, both in the military and with Elwood police,” Fishers High School Principal Jason Urban said. “The entire FHS Tiger family grieves this tragic loss of such a promising young man full of talent and potential.”

We don’t have an over-incarceration problem in this nation; we have a problem addressing the reality of black crime and the anti-white animosity dominating the thinking of so many urban and suburban blacks, peddled by an elite hostile to the Historic American Nation.

Police should have the monopoly on violence in America. Ever since the 3rd Precinct in Minneapolis was burned by Black Lives Matter activists in May of 2020, that monopoly has been ceded to people with extreme antipathy to white police officers and white people nationwide.

Rest in peace, Officer Noah Shahnavaz. Your murderer should have been in jail for life for his prior attempt at killing a police officer.

Now, your murderer will be celebrated by other aspiring black rappers for killing a white police officer.