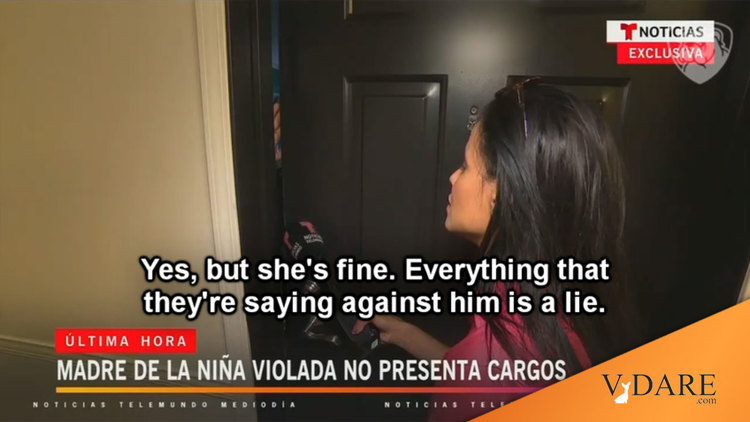 Hispanic Mothers Who Cooperate With Their Children’s Molesters

In the now-famous case of a 10-year-old girl who got pregnant by a Guatemalan illegal, the victim‘s Hispanic mother seems to be either complicit or complaisant in the abuse of her daughter.

Jorge Bonilla, who works for the conservative MRC/Newsbusters site and is bilingual, comments below:

WATCH: The mother of the Ohio 10/y rape victim tells Telemundo's @MariaVargasPion that the child "is fine", and "everything they say about (Gerson Flores) is a lie." pic.twitter.com/Vtpyn404g7

This appears to confirm my thesis of a domestic situation wherein the confessed rapist is also the paramour of the victim's mother (other familial relation is possible but less likely). Unfortunately, I saw many such cases while working as a court interpreter.

VARGAS PION: The woman, who refused to provide her name and concealed her face, states that she has not filed charges against 27-year-old Gerson Fuentes, who is charged with rape.

Per the authorities, he confessed to having vaginal contact on at least two occasions with the girl who recently turned 10, therefore it is estimated that she may have been 9 years old when she was raped and (then) became pregnant.

In my earlier article, I noted that Ann Coulter‘s Adios America includes a “Secret Decoder Ring“ for figuring out which of the crimes in your newspaper is an immigrant crime.

Point 3 is the significant one here. One of the cases of a woman being involved (complicit, complaisant, or accomplice) is the famous “Baby Hope“ case in New York, in which a raped and murdered 4-year-old corpse was unidentified for years. Ann Coulter has an excerpt at her Substack.

The 1991 discovery of a child’s decaying body in a cooler led to a twenty-two-year search for her rapist-murderer. Finally, in 2013, police got a tip that led them to Baby Hope’s rapist and murderer: It was her cousin, fifty-two-year-old Conrado Juarez, an illegal alien from Mexico, who admitted to smothering the four-year-old while raping her. …

What you need to know about that case is that the mother never reported the child missing.

At the time of Juarez’s arrest, Baby Hope’s mother was still living illegally in New York with some of her ten children. After several weeks of interrogation, the mother finally admitted that she always suspected Baby Hope was her daughter, but never told the police.

I talked about this when refuting Fred Reed‘s complaints about Ann Coulter‘s revelations in 2015.

Fred Reed having denied both Mexico‘s Age of Consent laws (refuted by Allan Wall here)  and greater acceptance of underage sex in Mexico—the kind of Mexicans he knows don’t do that kind of thing—he came out with this:

And now we have Coulter: “When it comes to child rape, the whole family gets involved. (Then Coulter writes. “Far from ‘I am woman, hear me roar,’ these are cultures where women help the men rape kids.”

Yes, Miss Goebbels. And they eat human flesh. I will now go and kick the dog, who seems to be in hiding.

His link goes to the Huffington Post whining about Coulter saying that, but you can read her—with VDARE.com links to the original stories and pictures of the rapists—proving it here: Ann Coulter: Donald Trump–STILL Right About Mexican Rapists.

This is not something Coulter made up. This is something Fred would have noticed if he had actually read Adios America.

In the section of the Coulter book reproduced below, she provides chapter and verse:

This is where cultural differences can create problems. Americans aren’t used to female relatives of raped and murdered children actively helping the perpetrator get away with it. [VDARE.com note: For example, Coulter describes the horrifying “Baby Hope” case in which the killer’s sister helped him dispose of the body, and the mother never reported her missing. Everyone involved was Mexican, and illegal.] They can’t grasp that the girl’s parents either didn’t know or didn’t care that she had been raped and murdered. 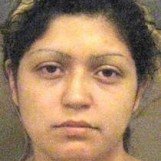 Far from “I am woman, hear me roar,” these are cultures where women aren’t accustomed to standing up to men, even men who rape kids. In 2013, illegal immigrant Bertha Leticia Rayo [Right] was arrested for allowing her former husband, an illegal immigrant from Guatemala, to rape her four-year-old daughter, then assisting his unsuccessful escape from the police. The rapist, Aroldo Guerra-Garcia, was aided in his escape attempt not only by his ex-wife, but by another woman, Krystal Galindo. (Kind of a ladies’ man, was Aroldo.) Guerra-Garcia entered a plea to aggravated criminal sodomy and aggravated indecent liberties with a child and was sentenced to eleven months in prison. In a separate case, the mother of the child rape victim was indicted for cruelly beating the child.23

That same year, the government busted up a child pornography operation in Illinois being run out of the home of three illegal aliens from Mexico, including one woman. At least one of them, Jorge Muhedano-Hernandez, had already been deported once. Peoria Journal Star headline: “Bloomington Men Plead Guilty to False Documents.”24

In 2014, Isidro Garcia was arrested in Bell Gardens, California, accused of drugging and kidnapping the fifteen-year-old daughter of his girlfriend, then forcing the girl to marry him and bear his child. The mother suspected Garcia, then thirty-one years old, had been raping her teenaged daughter, but did nothing. All three were illegal aliens from Mexico.25

In New Mexico, there was a father-son child rape duo. When being sentenced for repeatedly raping a three-year-old and an eight-year-old, Mexican illegal immigrant Luis Casarez’s argument to the judge that he did not deserve jail time sounded like Marco Rubio’s talking points about hardworking illegal immigrants with roots in America: “I have been here for many years”—Casarez said, incongruously, through a translator. “That’s why,” he added, “I’ve been working instead of getting involved with problems.” Other than that one thing.

That’s just as it appears in Adios, America.

It‘s no wonder that people don‘t know about this stuff.