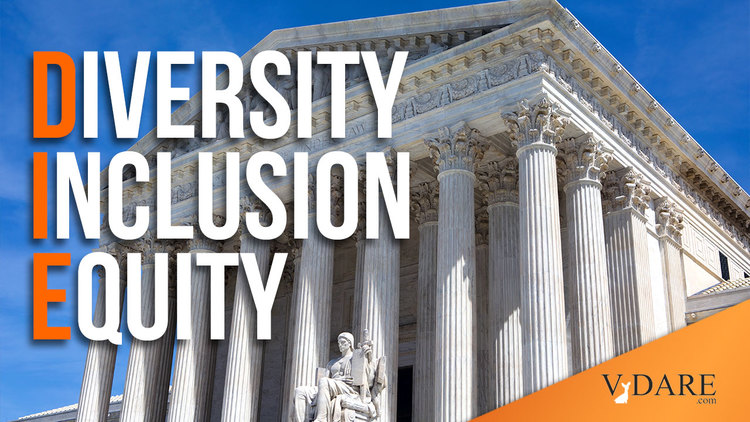 Corporate America is 100 percent anti-white, going all in to side with affirmative action. As one of the best accounts on Twitter put it succinctly: “Minorities are so oppressed that every major power center in America acted in unison to justify preferring them in employment and admissions.”

WASHINGTON—Dozens of major corporations have asked the Supreme Court to affirm the use of racial preferences in college admissions, arguing that more diversity on campuses contribute both to commercial innovation and business success. “These benefits are not simply intangible; they translate into businesses’ bottom lines.” Signatories to the brief titled, “major American business enterprises,” included tech giants such as Apple Inc. and Alphabet Inc.’s Google unit; manufacturers including Corning Inc. and General Motors Co., pharma and biotech companies and transportation operators such as American Airlines Group Inc. and Lyft Inc. The brief cited reports published by journals including the Academy of Management Journal, Corporate Governance, and the Review of Quantitative Finance and Accounting.

So what major corporations have “acted in unison” to defend an anti-white policy before the Supreme Court (after all, diversity in the workplace just means not hiring white people to the benefit of non-white applicants, regardless of their merit)?

In a show of historic and overwhelming support for affirmative action, 82 corporations and business groups (see list below) signed three amicus briefs filed in the Supreme Court of the United States in Students for Fair Admissions (SFFA) v. Harvard and SFFA v. University of North Carolina asking the Court to uphold over 40 years of precedent allowing colleges and universities to consider race as one of many factors in admissions.

The Legal Defense Fund (LDF), Asian Americans Advancing Justice-AAJC, and the Lawyers’ Committee for Civil Rights Under the Law are proud to stand with 82 leading corporations and business groups from a wide variety of industries and areas across the country in reaffirming to the Supreme Court that the economy derives direct benefits from employees educated in diverse settings. The group includes businesses that submitted briefs to the Supreme Court in support of race-conscious admissions almost 20 years ago in Grutter v. Bollinger, as well as new companies that did not exist then. Combined, the companies signing onto the amicus briefs account for over 5.5 million employees worldwide and more than $3.2 trillion of annual revenue.

As noted in the brief on behalf of major American business enterprises: “‘[S]trong evidence’ supports the insight, confirmed by Amici’s experience, that university students who study and interact with diverse peers, and particularly with racially and ethnically diverse peers, exhibit enhanced cognitive development necessary for a wide range of skills highly valued in today’s economy … Students of all racial backgrounds benefit from diverse university environments … Building a diverse classroom experience is how to turn out the most informed critical thinkers. Classroom diversity is crucial to producing employable, productive, value-adding citizens in business.”

As the science and technology companies note in their brief: “For science and technology companies to achieve … competitive advantages, universities must admit racially diverse classes of students and foster inclusive cultures … [C]ompanies whose workforces are racially and otherwise diverse will be better equipped to identify and address any number of scientific and technological challenges … Tech companies work on unconventional questions that require creative solutions, and diverse groups consistently outperform homogenous groups on exactly that type of problem solving.”

A third amicus brief filed by International Business Machines Corp. (IBM) and Aeris Communications, Inc. (Aeris) along with the Massachusetts Institute of Technology (MIT) and Stanford University “underscore[s] the importance of diversity not just within higher education or the corporate world at large, but in the particular cross-section of academia and industry within the intensely collaborative, and increasingly global, STEM industries.” As IBM, Aeris, MIT, and Stanford explain, “Not only does diversity promote better outcomes for students in STEM, it contributes to better science. As such, American businesses at the forefront of innovation in STEM depend on the availability of a diverse cross-section of talented graduates from the nation’s most rigorous and elite institutions.”

Here’s a rundown of corporations that have decided advancing anti-white policies in college admissions should be a Constitutionally protected endeavor:

Diversity just means fewer whites participating in said activity (be it a vocation or avocation). And Corporate America is fine with enshrining anti-white policies into law to maintain diversity as a sacred right in what’s left of our nation.