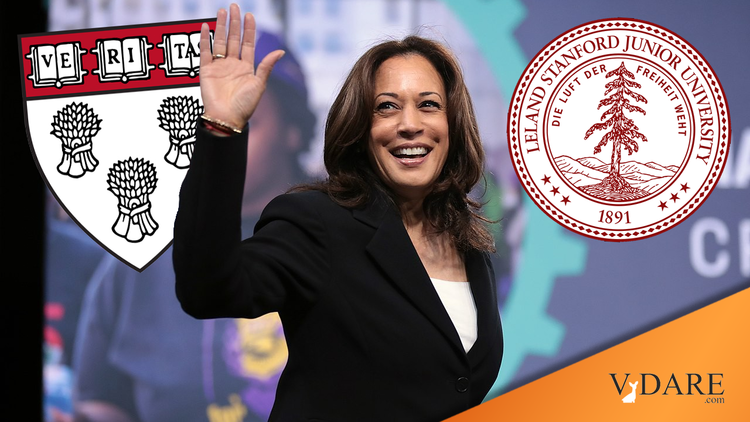 How Smart Is Kamala Harris?

Kamala Harris is from an academic family (father is a Stanford professor, mother was a medical researcher) but her own academic track record is less than impressive for somebody who qualifies for affirmative action as black.

She went to Howard U. in Washington DC, which is a famous Historically Black College or University, but it’s still an HBCU. She majored in psychology and economics. I don’t see anything about academic honors.

Then she went to the Hastings law school in San Francisco, which has some vague connection to the U. of California. It’s significantly easier to get into than the UC Berkeley law school across the bay.

She failed the difficult California bar exam on her first try and then passed on her second crack.

This is a pretty similar academic background to Mike Pence, another lawyer, or to Biden and Trump for that matter. But only Harris was eligible for affirmative action.

In contrast, Kamala’s younger sister Maya graduated from UC Berkeley and then Stanford Law School despite becoming a single mother at 17. Maya’s daughter Meena Harris went to Stanford undergrad and then Harvard Law School. So it’s not all that hard for the descendants of a mulatto Jamaican professor to get accepted by elite universities and law schools. But Kamala Harris was not.

I like the URL (i.e., original headline) better: businessinsider.com/activist-meena-harris-building-social-justice-empire-2020-5

In 2017, she launched the clothing line Phenomenal Woman, which seeks to highlight social justice causes throughout the world.

This year, she released a children’s book, hoping to provide more representation for young children of color.

In existing children’s books, 50% of all characters are white and 27% are anthropomorphic.

In an interview with Business Insider, Harris talks about her entrepreneurial projects, and how she hopes to inspire the next generation of activists.

Meena Harris always thought she was going to be a lawyer. She did, after all, grow up in a family of lawyers…

But Harris was also very creative. After attending Stanford University, graduating from Harvard Law School, and embarking on a brief legal career, Harris decided a traditional career path wasn’t for her.

Instead, she sought to forge her own path. Being a public servant, she figured, didn’t necessarily mean she had to become a lawyer.

Harris turned to fashion to highlight social injustices and inequality in the world.

The project that launched Harris’ social justice-focused entrepreneurship began shortly after the inauguration of Donald Trump, with a T-shirt that had the words “Phenomenal Woman” on it — a phrase borrowed from the Maya Angelou poem of the same name.

The shirt was an expression of female empowerment, a political statement in a time where women still face economic disparity and where intersectionality has yet to become a mainstay in modern-day feminism.

In many ways, the shirt was simple in its political message. But in other ways, it was quite radical.

“I never thought Phenomenal Woman would turn into something big, you know?” she said.

But the shirt did become big. And after its success, Harris decided to launch an entire clothing line that highlighted sociopolitical injustices throughout the world. Officially, on International Women’s Day in 2017, Phenomenal Woman was born.

… Harris now works at the company full-time and has helped expand it into a cultural commentary force. Shirts for sale now include slogans such as “Phenomenal Mother,” “Phenomenally Asian,” “Phenomenally Latina,” and “Powerful Black Voter.”

How about: “They’re real, and they’re Phenomenal”?

The company has launched numerous campaigns and lent its support to non-profit organizations such as the Essie Justice Group, which seeks to end mass incarceration; the Black Futures Lab, which helps to build black political power; Native Voices Rising, which promotes advocacy and civic engagement in indigenous communities, as well as the TGI Justice, which seeks to end discrimination against transgender, intersex, and gender-variant people.

With the publication of “Kamala and Maya’s Big Idea,” released today, Harris became one of the few black authors to have a published children’s book.

Based on a true story about Harris’ mother and aunt, the book follows two sisters who turn the unused courtyard in their apartment building into an area for kids to play. It’s a simple premise that could have significant impact in terms of the representation it will give to young children of color. Only 7% of new children’s books published in 2017 were written by black, Latinx, and Native authors, Lee and Low’s survey found.