It happens all the time in America. Smart, principled, well-meaning whites are sucked in completely by the romance of the plight of the exotic, non-white other. The allure is powerful: combine faraway locales with Christian zeal or social justice fervor, and the liberation from boring suburban normalcy is too much to resist.

For Amy Biehl,  a young white girl in South African in the 90s, in the the adventure ended in death (some people call this 'Amy Biehl Syndrome'). For Tim Kaine, the adventure continues with the nomination to be the Vice President under Hillary Clinton.

In Honduras, a Spiritual and Political Awakening for Tim Kaine

In September 1980, as violence and civil war erupted throughout Central America, a quiet American left Harvard Law School to volunteer with Jesuit missionaries in northern Honduras.

Around him, the United States-backed military dictatorship hunted Marxists and cracked down on the Catholic clergy for preaching empowerment to peasant farmers. But some locals also looked warily on the bearded and mop-haired Midwesterner in their midst.

Just a few hours south, the Central Intelligence Agency was using Honduras as a staging ground in its covert war against Latin American communism, with right-wing forces training for operations in El Salvador and Nicaragua.

“Some of the people were wondering what’s going on, who is this guy?” Tim Kaine, then a 22-year-old volunteer and now the Democratic nominee for vice president, said in an interview. He understood why. His mentors in the priesthood had also urged him to be wary of friendly American faces.

“It was a time of such intrigue and suspicion,” Mr. Kaine said. [More]

And Kaine and his Jesuit mentors were “intriguing” on the enemy side.

That Kaine's association with unabashedly communist 'liberation theology' priests doesn't earn more critical press coverage is a testament to, well, a press that sees no problem with communism.

Based on the little that I know about him, it's hard to see how Tim Kaine is a bad guy. He comes off as a genuinely good guy. He took to heart the motto of Rockhurst High School, the Jesuit institution he graduated from in 1976: “Men for Others”. Rockhurst, by the way, has a reputation as an old-school, Catholic-tough, all-guy football citadel, not a collection of sandal-wearing pinkos.

But that background is exactly what the system loves: a non-Jewish Irish-Catholic Midwesterner who has decided that our political priority should be everyone but whites. It's for this reason that the New York Times would sometimes go for a white male Southerner as its editor.

The problem is that however well-meaning, Tim Kaine is wrong. Hondurans aren't poor because of capitalism or the CIA. It's because Hondurans are heavy on the indigenous Indian blood and light on the European blood (Costa Ricans reverse this, which is why Costa Rica is a relatively desirable place in Central America). 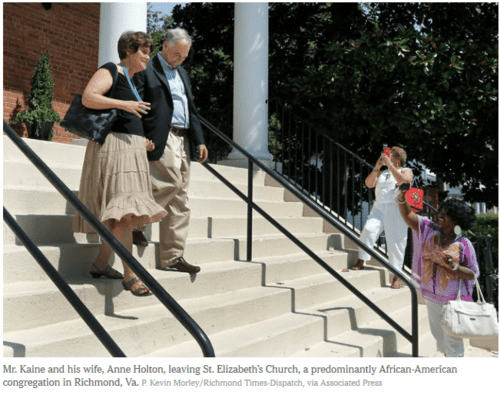 We can assume that Tim Kaine doesn't have a clue about this, which is why he has no business with access to government power. He's the worst combination: a reassuringly white appearance, ready to pursue policies that punish whites to the maximum.

He is also completely out of touch with the feelings of the many white Americans who are instinctively supporting Donald Trump. While he wallows in the missionary's self-congratulation for throwing up hosannas at an all-black church in Richmond, whites elsewhere are sick of being bashed for being white, sick of being blamed for non-white travails, and starting to wonder if they aren't the ones who really need liberation theology.