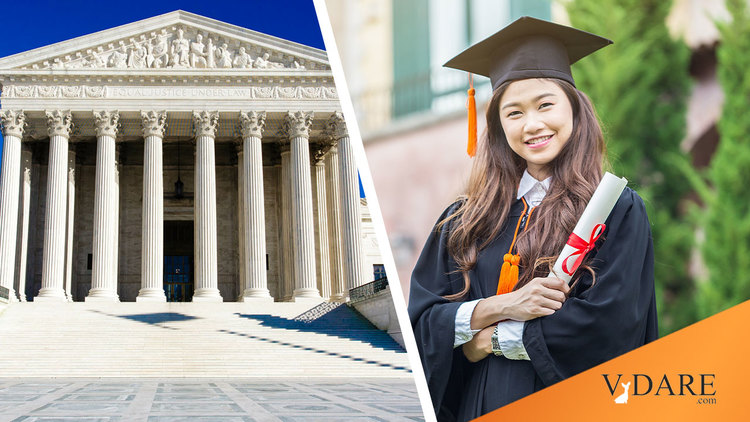 How Will The Supreme Court Fudge The Asian Admissions/Affirmative Action Issue? (They WILL Fudge It)

The Supremes have agreed to hear appeals by an activist group named Students for Fair Admissions against Harvard and the University of North Carolina.

Those two universities, says the group, discriminate in their admissions policies against students from Asian backgrounds. The hearings will be later this year, with rulings issued in spring or summer next year.

The fun here will be seeing how ingenious the court is in fudging the issue. They will fudge it, of course. Leaving aside the bogus college courses created for dumb students accepted as legacies, athletes, and diversities—Art History, Communications, and any course with "Studies" in the name—strictly meritocratic selection in serious subjects like Physics or History is unthinkable.

Real subjects demanding high IQ would, if students were admitted meritocratically, give you a student body in those subjects around one percent black, ten percent Hispanic, forty percent white, and forty-nine percent Asian; and half of the whites would be Jewish. That would be a huge national scandal, with weeping and rending of garments from coast to coast.

Nobody wants that to happen, although there's a conflict in the public mind between not wanting it to happen and believing there's a fair, non-discriminatory way to avoid it happening.

So the New York Times tells us that, quote:

A Pew Research Center survey in 2019 found that 73 percent of Americans said colleges and universities should not consider race or ethnicity when making decisions about student admissions.

That's right after having told us, in the same paragraph, that

Most Americans believe that it is important to promote racial and ethnic diversity in the workplace and that there is still racism in American society.

So the great American public wants to have their Affirmative Action cake and eat it too.

If the Supreme Court tells them to eat it and the student body at our prestige colleges turn forty-nine percent Asian and one percent black, all hell will break loose. That would ignite a roar of outrage by comparison with which today's wailing about "systemic racism" and "white supremacy" would be mere mouse squeaks.

And the outrage would be directed at the Supremes. They'd be in real, serious danger of being lynched.

So they're not going to let it happen. They'll work up a fudge, just as their predecessors did: in the University of Texas case six years ago, in Grutter v. Bollinger and Gratz v. Bollinger in 2003, and the Bakke case in 1978.

For one thing the Supremes are lawyers, expert manipulators of language—fudge-meisters. It comes naturally to them. For another, they are not numerate enough to face the reality of race differences, so working up a fudge won't bother their consciences.

The fudge will, like those previous fudges, be fudgy enough that the colleges can go on doing what they've been doing, just calling it by some different name. So the wheel turns.