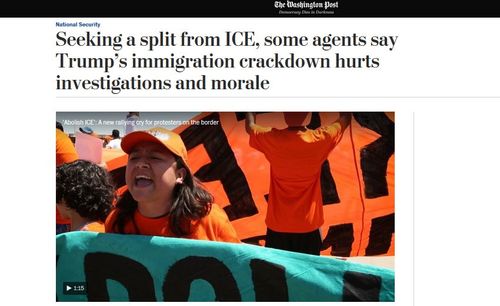 I warned President Trump against the leadership in U.S. Immigration and Customs Enforcement (ICE) Special Victims Unit (SVU), which is how I pejoratively refer to one of the two components of ICE, the other being Enforcement and Removal Operations (ERO).  ICE SVU management detests its immigration enforcement responsibilities.  It does not want to do immigration enforcement.  And today most of the Special Agents-in-Charge (SAC) publicly attacked President Trump by demanding that ICE SVU be removed from ICE and transferred elsewhere.

This is open and deliberate insubordination.  It is an open attack on the President’s immigration enforcement priorities.  These same SACs ignored the illegal and unconstitutional Obama Regime Administrative Amnesty and ignored their own Oaths of Office to implement that monstrosity.  These employees, who do not make policy, but carry out policy are all Obama Regime appointees and self-styled members of #TheResistance.  They are also illegally acting in a politically partisan manner, in violation of the Hatch Act, that prohibits political activity by employees while on duty, which this insubordination is.

The political backlash against U.S. Immigration and Customs Enforcement has turned so intense that leaders of the agency’s criminal investigative division sent a letter last week to Homeland Security Secretary Kirstjen Nielsen urging an organizational split.

The letter, signed by the majority of special agents in charge of ICE’s Homeland Security Investigative Division (HSI), offered a window into growing internal tension at the agency as an “Abolish ICE” protest movement has targeted its offices and won support from left-wing Democrats.

Sadly your correspondent predicted this insubordination and the sabotage by the ICE SVU SACs.

ICE HSI actively shirks its immigration enforcement responsibilities and has long been looking for a mission doing anything but immigration law enforcement. I refer to it as ICE SVU because it has apparently decided to concentrate on child pornography and similar non-immigration offenses as its major investigative effort—which has placed it in conflict with other law enforcement agencies, such as the Federal Bureau of Investigation, which previously led such efforts. ICE HSI has also waged campaigns against other Federal law enforcement agencies, trying to muscle in on the turf of agencies like the DEA.

President Trump will have major problems with ICE HSI management and agents. Even current agents don’t want to do immigration work. They consider it beneath them, and they have little or no knowledge of immigration law.

My advice to President Trump: remove the top leadership altogether. Replace them with Border Patrol Agents and officers from ICE ERO. Make an example of a few Senior Executive Service (SES) managers by termination. And then the rest will follow.

[President Trump Will Have Foes In Immigration Bureaucracy—But Also Friends. They Can Help Him Win, by Federale, VDare.com, April 25, 2016]

The letter is openly political and clearly a violation of the Hatch Act by its open claim that ICE SVU can’t do its assignment because of immigration policies rooted in politics.

“The perception of HSI’s investigative independence is unnecessarily impacted by the political nature of ERO’s civil immigration enforcement,” the agents wrote.

Well, low level managers have no say, nor should they have any concerns regarding political policy decisions made by the President, their responsibility to salute and follow instructions to the best of their ability, not to complain that they don’t want to be associated with dirty immigration work…

“Many jurisdictions continue to refuse to work with HSI because of a perceived linkage to the politics of civil immigration,” the investigators wrote. “Other jurisdictions agree to partner with HSI as long as the ‘ICE’ name is excluded from any public facing information.”

All political complaints and that is what the crux of the issue is, ICE SVU doesn’t want to do immigration work, it is not sexy, they want to do something else.  And they blame other law enforcement agencies for their own failure to do their assignment by stopping drugs and transnational gangs.  Of course, both those issues are wrapped up in illegal immigration as drug smugglers are predominately aliens as are members of transnational gangs.

In one indication of eroding morale, the special agents told Nielsen that making HSI its own independent agency “will allow employees to develop a strong agency pride.”

ICE SVU’s morale problem is of its own making.  It did not want to do immigration work, but it failed to develop any strategy beyond photo ops around the Super Bowl about counterfeit goods, sex crimes, imported cars, and Christmas toys.  The pattern there is an obsession with customs laws, and that is because the saboteurs in ICE SVU are mostly legacy U.S. Customs Service (USCS) employees.

Back in the days of the USCS and the legacy Immigration and Naturalization Service (INS), there was a great rivalry between the agencies, but little overlap, as the agencies had two different responsibilities, one imported items and the other people. USCS Special Agents thought themselves to be superior to the INS Special Agents, though there was no real basis for the inflated ego of USCS investigators.

When the agencies were merged though, the legacy USCS investigators waged a bureaucratic war on the legacy INS personnel in the merged agency at ICE.  Legacy INS personnel were mostly forced out of ICE SVU, but ICE SVU was never able to revive its glory days of running drug smuggling investigations in competition with the Drug Enforcement Agency (DEA).  Despite their failure to develop esprit d’corps and a viable mission, their inflated view of themselves, an egomania, prevented them from any meaningful review of their problems which only got worse as they ran from the immigration mission, looking for any escape.  Coupled with a bloated middle management and horrible treatment of employees, ICE SVU came in at the bottom of employee satisfaction studies.

Now that ICE SVU is being forced into a real mission, these rebellious middle managers now want something else, what that is is not readily apparent, as their failure to deal successfully with drugs or international gangs will not improve with some sort of divorce from ICE ERO.

These insubordinate bureaucrats have no vision for their agency other than to avoid any meaningful work, especially if it is immigration work.  They don’t like the politics or the public perceptions.  And such betrayal to their fellow ICE employees at ERO.  What an insult.

Sadly, Lady DACA (Kirstjen Nielsen) has predictably taken no action against this insubordination.

Nielsen has not publicly responded to the letter.

A senior ICE official in Washington said the HSI agents’ letter was “not well received” at the agency’s headquarters, calling it “ill conceived and poorly timed” at a moment when so many staffers feel besieged by the backlash.

Lady DACA’s lack of action only confirms that she is in on the resistance to President Trump’s immigration enforcement policies.  She is tolerating insubordination and illegal political activity by subordinates.  Instead, she should have immediately fired each and every one of the ICE SVU Resistance.

Time for President Trump to fire Lady DACA and the ICE SVU saboteurs.