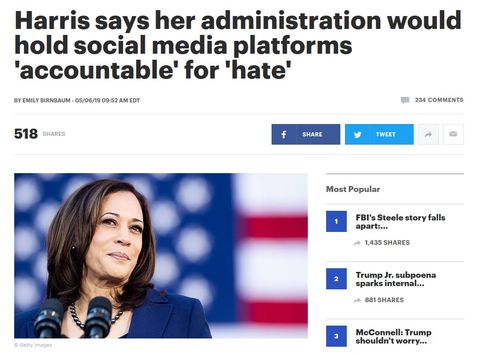 Presidential hopeful Kamala Harris once again shows she doesn't understand American values. [For Kamala Harris, America Is The Scene Of A Crime, by Gregory Hood, American Renaissance, February 22, 2019] She recently declared she would force social media to fight "hate," by which she means simply political opposition.

Sen. Kamala Harris (D-Calif.) on Sunday said her administration would hold social media platforms "accountable" for "hate," laying out her vision for combatting domestic terrorism at an event in Detroit.

"We will hold social media platforms accountable for the hate infiltrating their platforms, because they have a responsibility to help fight against this threat to our democracy," Harris, a 2020 presidential contender, said during the Fight for Freedom Fund Dinner at the Detroit NAACP.

Lawmakers have increasingly turned their attention toward addressing online extremism after a series of alleged white supremacist shooters used social media platforms to amplify their messages before attacking places of worship in recent months.

[Harris says her administration would hold social media platforms 'accountable' for 'hate', by Emily Brinbaum, The Hill, May 6, 2019]

Currently, there is at least some effort from parts of the conservative movement to guarantee free speech on social media. Yet much of the Beltway Right is sticking to the line that "private" companies can do whatever they want (except, of course, on "civil rights," when private property rights and conservative "principles" no longer mattter.)

The Democrats have no such hangups. As soon as they have the power to regulate speech, they will. And the paper barrier of the Constitution will mean nothing.