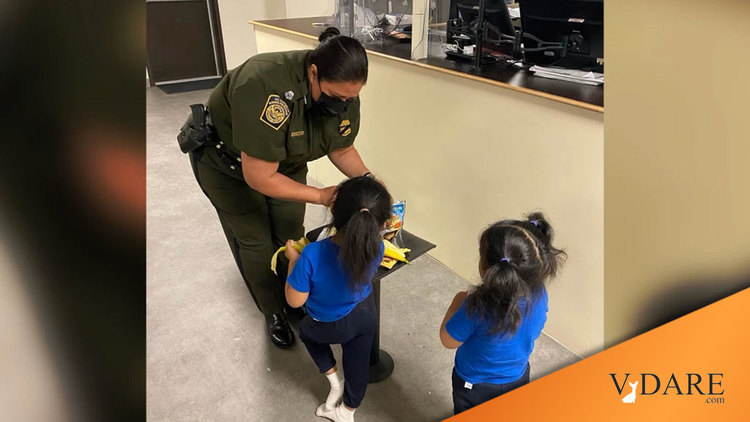 A follow-up here to the segment I began Radio Derb with last week.

That, you may recall, was about two infants—little girls aged five and three—who had been taken up to the top of our southern border wall and then dropped fourteen feet into the U.S.A.

Well, my commentary was obliquely about that. The dropping of the infants was what we ink-stained wretches in the journalism business refer to as a "hook": in this case, a hook on which to hang some opinions about where the proper focus of our concern should be directed in the matter of illegal immigration.

The proper focus of our concern, I said, should be on the integrity of our laws and the welfare of our citizens, not on the misfortunes of people breaking our laws, nor even on the misfortunes of helpless infants being used by those people as accessories to their crime. Law-breaking is dangerous, duh.

Well, here's the follow-up. We now have full details about the two little girls. The three-year-old's name is Yareli and the five-year-old is Yasmina, family name Aguilar. They are from Ecuador, a village named Jaboncillo, a place so inconsequential it is not listed among the two hundred thousand in the index to my 1975 Times Atlas of the World. I did find a place with that name on Google Maps, but the satellite view at highest magnification shows very few signs of human settlement.

All that information is from the Ecuadorian Consulate in Houston, Texas. The little girls themselves are in the custody of Customs and Border Protection and apparently none the worse for that fourteen-foot drop. They'll be flown back to Ecuador as soon as their family there can be located …

Just kidding, of course. The girls' parents, Mr. and Mrs. Aguilar, live in New York City. CBP tell us that the tots will be reunited with Mom and Dad as soon as it's been confirmed that the Aguilars are indeed the parents and  "are in good condition to receive the girls" [Ecuadorian girls dropped over border wall may be reunited with parents in NYC: officials, by Lorena Mongelli and Lia Eustachewich, NY Post, April 8, 2021].

So soon—a couple of weeks, is CBP's estimate, six weeks max—soon the Aguilar family, parents and children, will all be united in New York City. That should be just about as Mr. and Mrs. Aguilar receive their checks for $15,000 each from a special covid relief fund for illegals voted through the New York State legislature on Tuesday this week.

Wait, though. Now that these little girls' parents have been identified and are known to be present here illegally, why don't we first unite the children with their parents, then put the whole united family on a plane back to Ecuador? That would of course be a cost to us taxpayers, but way less than their $30,000 relief checks from New York State, to say nothing of the future costs of health care and schooling for those kids. Heck: we could fly the whole family back first class for a lot less than $30,000.

So why don't we do that? You know why. Because the people in power in our country have neither the will to enforce our laws nor the legislative functionality to change them. So … they just ignore them.

Not all of them, of course. Some laws they enforce very punctiliously, with great severity. You could ask the January 6th protestors about that, or the Proud Boys, or James Fields. No; they just ignore the laws that are inconvenient to the corporate and union donors who fund their political campaigns.

Well: now the Aguilars are in clover. Given that the younger of the two little girls is only three, I assume Mrs. Aguilar is still of child-bearing age. If she produces another child, that child will have birthright citizenship.

Here you are peering into the dark abyss of our current immigration insanity:

Truly it was said: "Those whom the gods wish to destroy, they first make mad."