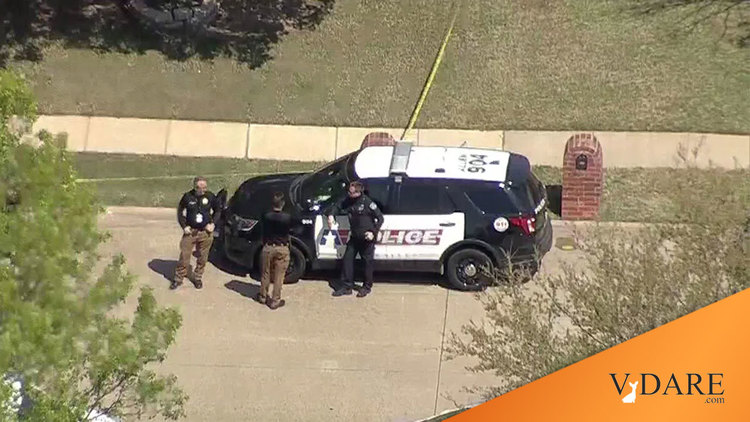 A story from Allen, TX, a northern suburb of Dallas, very much buries the lead:

The bodies of six people were found inside an Allen home early Monday morning in an apparent mass murder-suicide, Allen police say.

Officers were asked to perform a welfare check at about 1 a.m. at a home on the 1500 block of Pine Bluff Drive. When officers entered the residence, they discovered the bodies of six people.

The names and ages of the victims have not been confirmed, but police said they included a grandparent, two parents and three children.

It has not been confirmed when the deaths took place.

Felty said there is no threat to the neighborhood and that there were no problems reported at the home, KRLD reported.

This is the actual last line of the story:

Another story, from CBS-DFW, says "Police said there’s a social media post by one of the victims saying he made a pact with his brother to kill his family and commit suicide." This story has no ethnic details and a bunch of links to generic suicide prevention links.

Instead of talking about suicide, let's talk about Immigrant Mass Murder, specifically the kind we call "Familicide" where an immigrant goes crazy and wipes out his or her entire family. Brenda Walker first wrote this up in 2007, with Diversity Is Strength! It's Also…Familicide.

Here are some previous familicides from our Immigrant Mass Murder page. These seem to lean heavily towards the Indian Subcontinent, see boldfaced names below.

And finally,  Santa Clara Familicide Was Immigrant Mass Murder Syndrome—If You Read The Indian Press, a very short 2009 item which links to this story

Indian in US kills six relatives, self
An Indian engineer killed two of his children and three other relatives,including a toddler, before turning the gun on himself in Silicon Valley.
March 31, 2009

That's from the Indian Express, which is published in Bombay. Apparently, once again, the Indian press thinks it's interesting and important when there's a mass murder of Indians by an Indian, but the American press are all "Why would you want to know?"