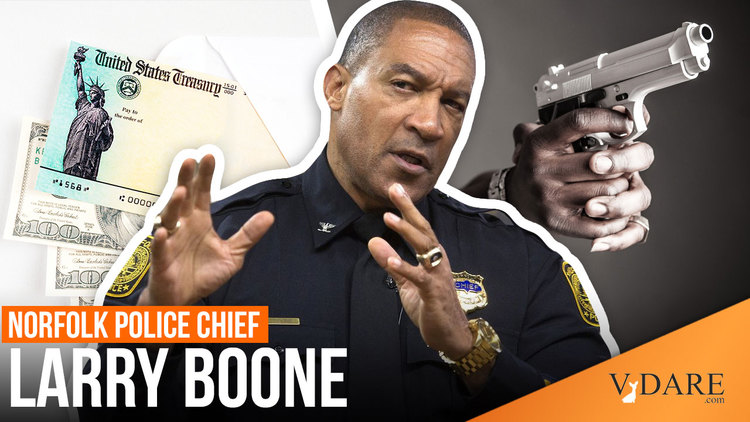 But aren’t white people using their stimulus checks to buy guns? Why aren’t they committing gun violence at the rate of black people across America?

It was another dangerous weekend of violence in Hampton Roads.

A majority of the shootings this time around were right in the heart of our region: Norfolk. Six shootings spanned the weekend in the city, leaving several dead including a 15-year-old girl. They happened in a variety of areas.

On Saturday, 15-year-old Teonna Coburn was shot to death as she was coming home from the grocery store on E. Tanners Creek Drive with her brother. The 17-year-old boy survived his wounds.

On Sunday night, officers responded to Vimy Ridge Avenue. They found a man with gunshot wounds. He died at the scene.

Norfolk Police Chief Larry Boone says he’s been talking about this problem for five years, and it’s not a new problem.

Boone says he believes he can trace the proliferation of gun violence to stimulus checks.

“If you look at when the stimulus checks were rolled out and correlate that to the uptick in gun purchases, you will see a correlation in gun violence.”

Boone says those guns then go to the most vulnerable Black and brown communities.

“There is a saying that when America has a cold, then Black and brown communities have the flu … It is impacted by crime, health issues, mental health, education, unemployment, and the police department is left to manage that,” Boone said.

Boone says Black and brown neighborhoods are inherently disadvantaged to neighborhoods with larger white populations when it comes to crime.

Boone also said those in power have created the issues.

“Systematic decisions are made by those in power that created this mess, and those that currently hold those positions. I am blaming them,” he said.

We pointed out to the chief it does sound like he is blaming them. What did he mean by that?

“It is not a Norfolk thing. It is an urban thing. It is redlining, and under education, unemployment, mental health,” he explained.

“Those poor kids. They see violence almost every day, and they got to take that to school, and they are expected to perform, but they just saw somebody get killed,” he said.

“That’s the telltale sign. They’re getting their hands on guns like M&Ms … the homicides have gone down, but what’s different is the impact to our youth,” he said.

A lot of white people are under the poverty line in Norfolk, but who cares? They aren’t part of”an urban thing." It is redlining, and under education, unemployment, mental health…”

For more than half a decade, almost all gun violence has been black on black.

Again, white people are getting stimulus checks too… why aren’t they committing ANY gun violence?