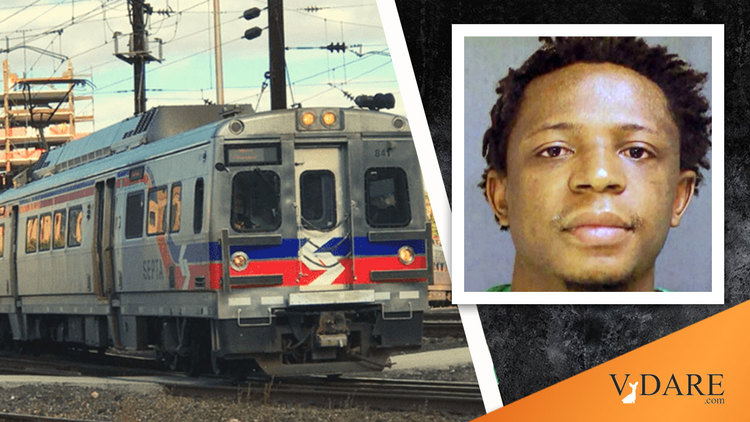 In Philadelphia, Illegal Alien From The Congo Rapes Woman On Train While People Film The Attack And Don't Call Police

Odds are everyone who witnessed this rape by an illegal alien from Africa on a SEPTA train in Philadelphia (57 percent of the riders are black) was probably black too, and hoped to post the latest viral video on WorldStarHipHop; they were all filming instead of calling the police.

With this stated, no one deserves to be sexually assaulted.

No one deserves to be sexually assaulted by an illegal alien, who by definition shouldn’t be in the country.

No one deserves to be sexually assaulted by an illegal alien who had been ordered deported.

No one deserves to be sexually assaulted by an illegal alien in a sanctuary city.

But here we are, in a nation busy tearing down the past so illegal aliens from Africa once ordered deported can rape a woman on public transportation, and instead of calling the police, those filming the sex assault hope for the next viral TikTok or WorldStarHipHop video.

All in the city where dead white males gathered centuries ago to frame what would become the United States of America.

An illegal alien, released into the United States by the federal government, is accused of raping a woman on a Pennsylvania train as passengers filmed on their cellphones and did not intervene.

Fiston Ngoy, a 35-year-old illegal alien from the Republic of the Congo, was arrested and charged with raping a woman on a Southeastern Pennsylvania Transportation Authority (SEPTA) train on the evening of October 13.

According to a report by Fox News’s Alex Pfeiffer and Adam Shaw, Ngoy originally arrived in the U.S. on an F-1 student visa in 2012. By 2015, though, Ngoy’s visa was terminated and he began living as an illegal alien after failing to self-deport.

Since then, Ngoy has allegedly accumulated a criminal record including pleading guilty to sexual abuse and was ordered released into the U.S. by a federal immigration judge in 2019, according to Fox News:

Meanwhile, court records show that he racked up “multiple arrests and two misdemeanor convictions, one for controlled substances and one for sexual abuse.” Ngoy pled guilty in 2017 in Washington D.C. to the sexual abuse misdemeanor and was sentenced to 120 days in prison and nine months probation. He was put in immigration detention in Jan. 2018. [Emphasis added]

However, he was never deported because he received a “withholding of removal” from an immigration judge in March 2019 after the Board of Immigration Appeals found that his misdemeanor sex offense was not a “serious crime” that would have made him ineligible for such a stay. [Emphasis added]

As a result, Ngoy was released and only had to report into Immigration and Customs Enforcement (ICE) under an order of supervision (OSUP). OSUPs involve conditions being placed on those who have been temporarily released from custody until they are able to be deported, typically involving regular check ins. [Emphasis added]

According to the Upper Darby Police Department, Ngoy raped the woman whom he did not know as passengers did not intervene and as some took out their cellphones to seemingly film the assault.

“Were they watching? I don’t know. Again, we’re still going through the video but there was a lot of people, in my opinion, that should’ve intervened,” Upper Darby Police Superintendent Tim Bernhardt told local media.

“Somebody should’ve done something. It speaks to where we are in society,” Bernhardt continued. “Who would allow something like that to take place? So it’s troubling but again, we’re working on that and we’re trying to identify anyone that we saw coming on and off the El at that time.”

Odds are extremely high all the people filming the assault by the illegal alien from Africa were black. Odds are higher that everyone filming the assault and refusing to notify the police a sex assault was taking place engaged in this morally indefensible act because they saw WorldStarHipHop fame in their future.