The more America imports unfriendly foreigners to live here, the more obvious the need for the Second Amendment. Of course, every citizen deserves access to adequate self-defense, and we were guaranteed that right in our founding documents.

Today normal life has suddenly become a lot more complicated and perhaps dangerous with the coronavirus threat, or at least that’s how many Americans must feel, as shown by increased numbers of firearms sales in recent days.

Tucker Carlson noticed the trend and surmised that many Americans must not feel safe for so many newbies to be buying guns. 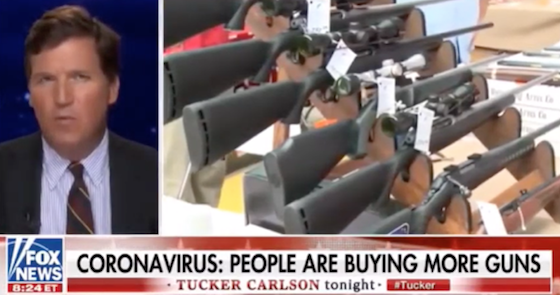 He also observed that State Department continued to resettle refugees from corona-infected nations through this week, showing how old preferences live on.

TUCKER CARLSON: Across the country, Americans are literally the lining up outside gun stores ahead of what could be some kind of shutdown.

UNIDENTIFIED GUN SHOPPER: I’ve been robbed before, you know, who says that the people aren’t going to start robbing for food, and that’s scary.

ANOTHER GUN SHOPPER: When you feel uncertainty about your security, you want to do something about it.

COLORADO REPORTER: Many of them are first-time firearm owners who are learning how to use a weapon to protect themselves and their families.

ARIZONA REPORTER: Coronavirus uncertainty has led to a spike of guns and ammo sales at his store.

UNIDENTIFIED MALE: They sold upwards of 40 to 50 guns yesterday alone.

ARIZONA REPORTER: That is a big uptick from a typical day.

GUN STORE OWNER ANDREW CHERNOFF: We got in a bunch of guns, I’m sure by the end of the day, we will be out of guns again. We are now seeing a lot of first time gun buyers who never would have thought to buy a gun before who are now saying I need to have something to protect myself.

CARLSON: And just to be clear, a lot of these people who have never owned a gun before, if the public believes their leaders would protect them, they wouldn’t be buying guns; but they know their leaders won’t, and so they are, and this infuriates Democrats.

In New York, Nassau County Executive Laura Curran attacked people for trying to protect themselves amid this uncertainty.

LAURA CURRAN, D-NASSAU COUNTY EXECUTIVE: Guns are not going to fight the virus. What will fight the virus is people staying home and isolating themselves and not having birthday parties and weddings and clustering together in big groups.

Tim Schmidt is President of the U.S. Concealed Carry Association. He joins us tonight. Tim, thanks so much for coming on. I mean, it does seem pretty clear that when you trust that the authorities are going to keep you safe, you’re probably not fixated on protecting yourself because you don’t have to be. People know that they need to protect themselves, correct?

TIM SCHMIDT, PRESIDENT, U.S. CONCEALED CARRY ASSOCIATION: Of course, Tucker, and as you’re talking about before, our law enforcement professionals and police departments, they had their hands full before the coronavirus, and so now, it’s only going to be worse.

Now more than ever, people need to understand that they need to be their family’s first line of defense.

CARLSON: Well, of course, and by the way, I thought there was a constitutional right guaranteeing that, and if there was ever a moment to invoke it, it’s now. So how can leaders lead? Air quotes around it, leaders like Laura Curran, the one we just saw right there from Nassau County, New York, how can she — I mean, how can any of them get in the way of your constitutional right to protect yourself?

SCHMIDT: Well, you’re right. They shouldn’t be, and honestly, I applaud all of these brand new people that are buying guns, but Tucker, what I’m about to say is going to become a little bit of a shock to you, especially coming from a guy like me, and that is that that so many — 90 percent of these brand new people buying guns have never owned guns before. They’ve probably never even touched a gun.

And that means they’re untrained. Now, don’t get me wrong, Tucker, I personally think that firearm ownership is a natural born right of free people. But with that, right, comes a tremendous responsibility and that responsibility is to be trained.

And so I will make a request right now if you’re watching this and you just bought a gun for self-defense, get training. Get training as fast as you can, whether it’s in person or even online, it will help you be a better defender, which we all know you’re going to have to be.

CARLSON: I think that’s really wise advice and anyone who has hunted a lot or has had guns, you know, they tend to have real respect for firearms because they’re dangerous tools. Thanks so much for that. Tim, we appreciate you coming on tonight.

CARLSON: Well around the world, thanks to this pandemic, countries are rediscovering the value of borders. Canada, believe it or not, has announced is closing itself off from foreigners. Obviously, it’s time we did the same.

To stop a virus, while millions of Americans can’t go outside, the State Department was still dropping outsiders, foreign nationals into their communities. We’re glad the Trump administration put a stop to that. Thank God, at least for now.