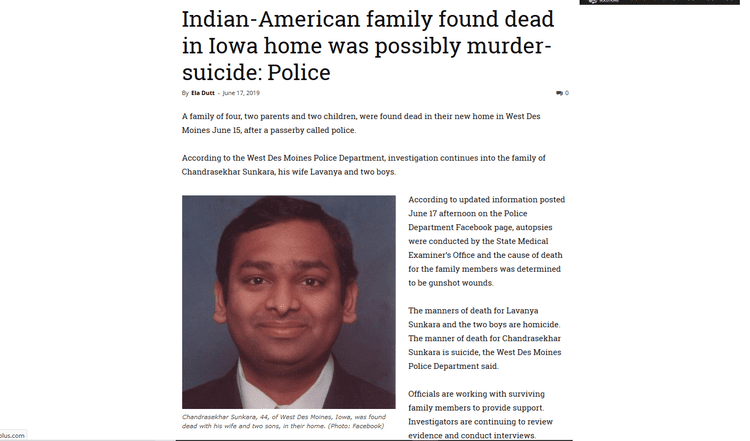 Chandrasekhar Sunkara, his wife Lavanya and their two sons, 15 and 10 were all found dead from gunshot wounds in a story reported by NBC as "Iowa family of four died in murder-suicide, police say", and by Inquistr.com as Motive Not Yet Determined For The Murder Of An Iowa Family Of Four.

The Indian press, on the other hand, reports the same story as Indian-American family found dead in Iowa home was possibly murder-suicide: Police, by Ela Dutt, June 17, 2019.

The Indian press is interested in the deceased's Indian background, and reports

The high school mentioned is an an Anglican school in England, but even if Sunkara was born there, he's not a British immigrant. Shrikar Somayajula, who owns an "after-school enrichment academy" in Des Moines, and who knew the family, is quoted as saying "You don't see something like this happen in the Indian community, let alone a heinous act like this."

Sadly, he's wrong. Our Immigrant Mass Murder page has category we call "familicide", where a father (very rarely a mother) will go crazy and wipe out the whole family.

Many reported cases are in the Indian community.

These are only the ones that happened to come to our attention, since the MSM covers them on what I call a "man arrested" basis. For example, while Laxma Reddy, an MD from Andhrapradesh, was on the run, he was described in headlines as "man", "suspect", and "husband". A Nevada deputy shot him, presumably because the deputy, unlike the American public, was allowed to know that the wanted killer was an Indian.