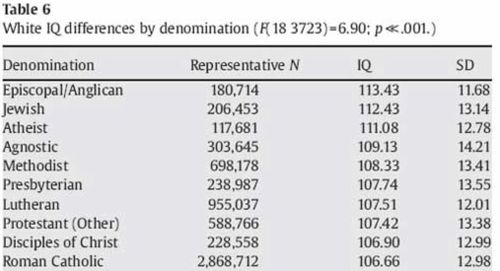 IQ by Religious Denomination Among Whites

On Twittter, F0RHEXET shares a table from Helmuth Nyborg: The high figures across the board immediately jump out as indicative of something being amiss. The average for Nyborg’s entire white sample is 106.09, nearly half a standard deviation above the conventional white mean. Adjusting for that apparent inflation across the board, though, his results correlate extraordinarily well (r = .91) with the estimates that can be gleaned from the General Social Survey utilizing a far more modest total sample of merely 5,928 (“merely” compared to Nyborg’s nearly 11 million!).

Restricting responses to those born in the US to avoid language fluency issues, to whites to avoid racial confounding, and from the years 2000-2016 for contemporary relevance, average IQ scores among whites, by religious affiliation, as computed from Wordsum scores assuming a white population mean of 100 and a standard deviation of 15:

The GSS is a great resource. It houses troves of fascinating sociological information yet is woefully underutilized by industry professionals in part because said professionals are largely innumerate and also because the truth often hurts–emotionally and professionally. One man’s neglected treasure is another man’s appreciated treasure!