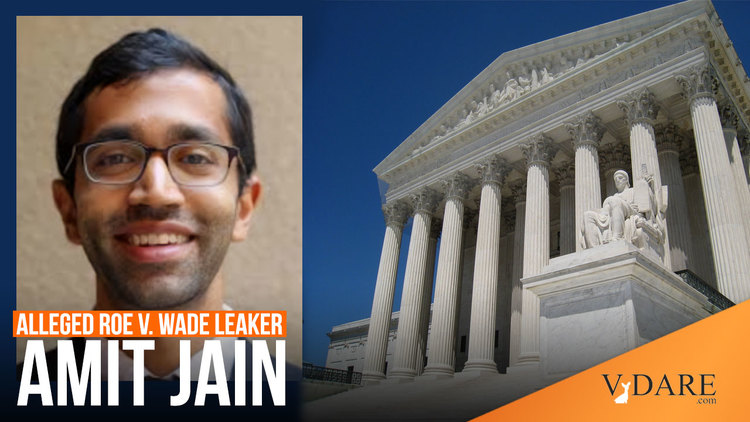 Is Roe Leaker Another Unscrupulous Indian Trying To Destroy The Country?

Twitter and Gab are aflame with speculation, and the outright accusation that Amit Jain, a communist, anti-American Indian, is the U.S. Supreme Court clerk who leaked the court’s decision to overturn Roe v. Wade. If true, the move is typically underhanded Indian subversion.

Is Amit Jain, who clerks for Supreme Court Justice Sonia Sotomayor, the man who ended his career to leak the Roe V Wade document? https://t.co/tDJpepO9qO pic.twitter.com/ahBn3OVy1J

Tweeters who finger Jain do so for three reasons:

Jain was quoted in a 2017 Politico piece by Josh Gerstein.

All I’m gonna say is Amit Jain signed a letter while at Yale blasting Yale for supporting g Kavanaugh. Go google who he clerks for atm

Holy Cow!!!! I just found this article that was penned by Amit Jain and several colleagues from 2017 in The Nation. The writing is on the wall. pic.twitter.com/i8DqZUpJcS

Unethical tactics to get what they want is, again, typically Indian behavior—from call center scams, to Medicaid fraud by unknown immigrants, to openly subverting U.S. immigration law by a U.S. congresswoman.

Now this. Associate Justice Sonia Sotomayor hired a communist Indian law clerk who thinks that “that disruption, creative protest, and rule-breaking are valid and often necessary tactics to effect change.” Jain doesn’t like the decision to overturn Roe, so he does something that is never done: leaks a full draft of the decision.

I speculated about the danger of putting blacks with brains in charge of Big Tech in two recent takeouts here. If Jain is the leaker, here’s more evidence that shows how dangerous they are not just in Big Tech, but in positions of legal and political power.

In the second piece, I quoted Charles Grant, an 18th-century representative of the East India Company:

The people of the lower provinces in particular, with an exception of the military caste, are as dastardly as they are unprincipled. They seek their ends by mean artifices, low cunning, intrigue, falsehood, servility, and hypocritical obsequiousness. To superiors they appear full of reverence, of humble and willing submission, and readiness to do every thing that may be required of them; and as long as they discern something either to expect or to fear, they are wonderfully patient of slights, neglects, and injuries. But under all this apparent passiveness and meanness of temper, they are immovably persisting in their secret views.

Now, let’s find out if it’s Jain and end his legal career.