As I’ve often pointed out, the existence of official government reports is important in establishing the respectability of a topic. For example, before the release of the Rotherham Report in 2014, it should have been obvious to anybody who didn’t have his head buried in the sand that England had a massive problem with Pakistani pimps sexually abusing underage English girls. But the abundance of different kinds of evidence wasn’t getting the issue talked about in the Respectable Media, until the city of Rotherham issued an official report on the subject.

Similarly, the statistical fact that African-Americans commit murder at a vastly higher per capita rate than do white Americans is not something you are supposed to mention in the press, but at least dissidents in the comments can cite a PDF issued by the federal Bureau of Justice Statistic s back in 2011 that found that blacks were, per capita, 7.4 times as likely to be murder offenders as whites, with whites, curiously, including almost all Hispanics.

According to a 2011 Steffensmeier et al. paper, blacks were "murder offenders" at a per capita rate 11.7 times that of whites: https://t.co/N9ERTYEG0n pic.twitter.com/U9HTQQppqZ

But the black-white gap in murder offending might be worse than the Obama Administration’s 2011 report suggests. One obvious problem with the Bureau of Justice Statistics “Homicide” report is that it doesn’t break out Hispanics from whites, unlike almost all other government reports since c. 1970.

Back in 1945-1965, Latin American pressure groups such as LULAC asked government agencies to lump Latin Americans in as white/Caucasian, which is how they were treated on the 1950 and 1960 Censuses. Police forces like the LAPD went along with it, in part because having a huge Caucasian category in which to lump Europeans, Latin Americans, Arabs, and Asian Indians reduced the amount of outright error in suspect descriptions.

Crime statistics, unlike other government statistics, tended to have three racial categories: Other (East Asians, American Indians, and maybe Polynesians), Black, and White (everybody leftover with some claim to be at least kind of Caucasian).

But after the introduction of affirmative action in 1969, pressure groups reversed course and demanded to shed their new Caucasian Disprivilege in favor of some that sweet, sweet Nonwhite Privilege.

Except in crime statistics … For example, from NBC News in 2018: 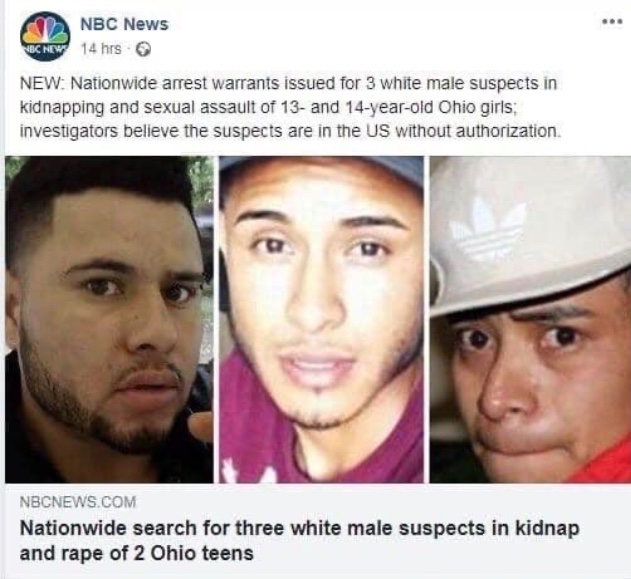 From Criminology, a 2011 study that tries to figure out what % of “white” murder offenders are actually Hispanic:

Abstract
Recent studies suggest a decline in the relative Black effect on violent crime in recent decades and interpret this decline as resulting from greater upward mobility among African Americans during the past several decades. However, other assessments of racial stratification in American society suggest at least as much durability as change in Black social mobility since the 1980s. Our goal is to assess how patterns of racial disparity in violent crime and incarceration have changed from 1980 to 2008. We argue that prior studies showing a shrinking Black share of violent crime might be in error because of reliance on White and Black national crime statistics that are confounded with Hispanic offenders, whose numbers have been increasing rapidly and whose violence rates are higher than that of Whites but lower than that of Blacks. Using 1980–2008 California and New York arrest data to adjust for this “Hispanic effect” in national Uniform Crime Reports (UCR) and National Crime Victimization Survey (NCVS) data, we assess whether the observed national decline in racial disparities in violent crime is an artifact of the growth in Hispanic populations and offenders. Results suggest that little overall change has occurred in the Black share of violent offending in both UCR and NCVS estimates during the last 30 years. In addition, racial imbalances in arrest versus incarceration levels across the index violent crimes are both small and comparably sized across the study period. We conclude by discussing the consistency of these findings with trends in economic and social integration of Blacks in American society during the past 50 years.

The researchers come up with a finding that adjusting out Hispanic murderers from whites raises the black/white murder offender ratio from 7.4 X to 11.7 X.

From a press release from Penn State writing up this study:

… The rise in the U.S. Hispanic population and the sharp jump in black violent crime during the late 1980s and early 1990s may skew statistics from the FBI’s Uniform Crime Reports and the National Crime Victimization Survey that appear to show a recent drop in black violence, said Darrell Steffensmeier, professor, sociology, and crime, law and justice, Penn State.

The researchers, who released their findings in the current issue of Criminology, indicated that studies on black violent crime — a crime that involves force or the threat of force — often fail to account for the rise in the number of Hispanics in the U.S. Since there is no Hispanic category in the UCR and approximately 93 percent of Hispanics identify themselves, or are identified by law enforcement officers, as white, most arrests of Hispanics are added to white violent crime rates.

“The result is that the violent crime rates for whites are inflated and the black rates are deflated in these studies,” said Steffensmeier, who worked with Jeffrey T. Ulmer, associate professor, and Casey T. Harris, graduate student, both in sociology and crime, law and justice, Penn State and Ben Feldmeyer, assistant professor, University of Tennessee-Knoxville.

When the researchers adjusted for the Hispanic effect, there was little overall change in the black percentage of violent crime, said Steffensmeier.

Using arrest statistics from 1980 to 2008 in California and New York, two states that include a Hispanic category, the recalculated national figures indicated that the black percentage of assault increased slightly from 42 percent to 44 percent and homicide increased from 57 percent to 65 percent. There was a small decline in robbery, from 57 percent to 54 percent.

“It is the case that violent crime rates are lower today for blacks, as they also are for other race groupings, but the black percentage of violent crime is about the same today as in 1980,” Steffensmeier said.

According to Steffensmeier, studies that purport to show declines in black violent crimes may also rely on timelines that are too short to be effective. For instance, studies that start in the late 1980s and 1990s cover a period of rapid increase in black violent crime fueled by crack cocaine use in the inner cities. According to Steffensmeier, the recent decrease is more likely a return to average crime rates.

“A study that uses statistics from a short time period can lead to a regression to the mean effect,” said Steffensmeier. “Which basically means, when a trend rises quickly, it can fall just as quickly.”

On the other hand, the researcher’s choice of adjusting the national statistics based on arrest statistics in New York and California might exaggerate the amount of Hispanic crime.

Most of New York’s Hispanic murderers tend to be mulatto Puerto Ricans or Dominicans, ethnic groups who tend to have higher homicide rates than the more common mestizos from Mexico.

And my vague intuition is that California developed a pretty homicidal Chicano mestizo class back in the 1970s when Mexican-Americans formed some pretty imposing gangs on the streets and in the prisons. I think Mexican-Americans in California were more crime prone than in Texas.

Since then, the newer Mexican immigrants tend to be smaller and more docile.

Of course, another issue are all the murders that are never closed. The closure rates tend to be lowest in black neighborhoods, especially in black-run cities. So, the number of black murder offenders might be understated due to fears of witness-murdering by black gangs and other problems.

Finally, counting “murder offenders” rather than their victims might drive up the black percentage because, if my suspicion is correct, on average murders committed by blacks tend to have slightly more murder offenders involved than murders committed by whites. Generally, white murderers tend to act alone. They generally don’t have some friends who might think that helping them commit murder is a good idea.

So, this might tend to exaggerate the percentage of murder victims murdered by blacks.

All in all, I’d probably guess somewhere around 10X as the most accurate black / white murder ratio.