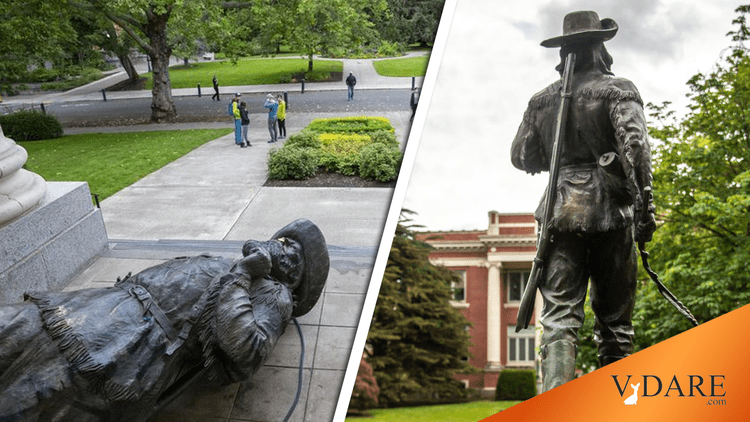 It's An Attack On White America's Past, Present, And Future: "Racist" Pioneer Statues Torn Down On University Of Oregon Campus

Manifest Destiny devolves to this.

Protesters on Saturday toppled two long-standing pioneer statues on the University of Oregon.

The statues have a history tied to the celebration of white conquest, and some students had renewed calls for their removal against a backdrop of international protests against racism and police brutality.

The Register-Guard reports a small group of protesters knocked the statues off their pedestals. One was dragged to the steps of Johnson Hall, the university administration building.

In a statement, the university said the statue’s future should be determined “through an inclusive and deliberative process, not a unilateral act of destruction.”

“These are obviously turbulent times. While we support peaceful protest and vigorous expression of ideas, we do not condone acts of vandalism,” the school said. “Our country, state and campus are coming to terms with historic and pervasive racism that we must address, but it is unfortunate that someone chose to deface and tear down these statues.”

The university also said a campus committee had been asked to look into whether the statues and other monuments should be removed, adding the statues will be placed in storage during the process.

The Pioneer was the first statue on the University of Oregon campus, according to the university website. During the 1919 ceremony in which it was dedicated, the president of the Oregon Historical Society gave a speech lauding the “Anglo-Saxon race,” according to a Hidden History article on the university’s library website.

The Pioneer Mother, erected in 1932, was the other statue removed by protesters. Researcher Brenda Frink told The Register-Guard in 2012 that similar pioneer mother statues celebrated “the expansion of American territory and the expansion of white occupation of that land.”

Frink noted the statue at the UO campus may not have the same intended meaning as other “pioneer mother” statues. The “pioneer mother” was also used by women’s rights activists of the early 20th century to reference equal strength to men, and used by conservatives to show a “preferable alternative to suffragists, flappers and New Women,” Frink said in the interview.

Both of the statues have faced a resurgence in calls for removal in the wake of a national movement addressing racism, white supremacy and police brutality following the police killing of George Floyd last month. The removal of the statues was part of a list of demands from the Black Student Collective on a petition with more than 2,600 signatures, as reported by the Daily Emerald.

Also on the list was a renaming of Deady Hall, named after Matthew Deady, the racist judge who founded the University of Oregon law school. Deady was a noted proponent of slavery and said only “pure white” men should be allowed to vote, according to a report commissioned by university President Michael Schill in 2016.

Schill has since recommended that the school’s board of trustees remove Deady’s name from the oldest building on UO’s campus.

Other statues commemorating imperialist and racist figures have seen removal in recent weeks across the United States, including multiple statues of Jefferson Davis and Christopher Columbus.

We all ended up losing in our quest to advance civilization in Oregon Trail.

It was never going to stop with Confederate Statues/Monuments.

It was never going to stop with tearing down statues/monuments or renaming streets/schools honoring the Founding Fathers of this nation.

It’s a war on every last vestige of the history white men created on this continent and the civilization they alone birthed.

In the game Oregon Trail, you’d die of cholera. In 2020 America, you now die of whiteness.

So does the past.

And so dies the future.