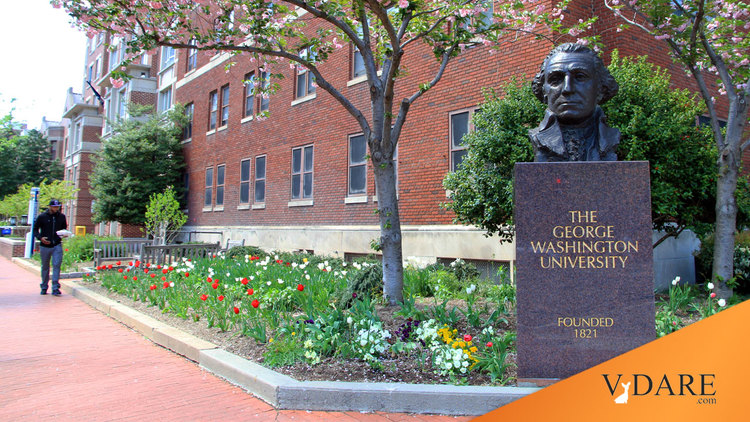 It Was Never Going To Stop With Confederate Statues...WASHINGTON POST Calls For Renaming George Washington University Because Of "Racism"

It Was Never Going to Stop With Confederate Statues…

The WASHINGTON Post says George WASHINGTON University must change its name because racism, by Katie Daviscourt, Post Millennial, May 10, 2022 In perhaps the greatest self-own of them all, the Washington Post published an article on Monday which argues that George Washington University must be renamed in order to address systemic racism and inequality.

By those standards, the Washington Post should follow suit and rename their own publication if they are truly serious about racial justice in America, as they claim to be.

The author argued that racism runs rampant at George Washington University and has been since its founding in 1821. As the nation found itself in a racial reckoning in 2020 following the death of George Floyd in Minneapolis police custody, social justice warriors demanded change.

Students renamed George Washington University’s Cloyd Heck Marvin Center, which was named after a segregationist, to the University Student Center in 2021. However, the author, Caleb Francois, a senior at George Washington University, said it hardly made a dent in addressing systemic racism and inequality. If the University really wanted to make meaningful change, they would get rid of their name honoring the nation’s first and most historical President.

The author states that America’s “history of slavery, Jim Crow, red lining and other discriminatory policies toward African Americans has never been fully addressed or atoned for…in which compromise and intolerance are no longer an option.”

It’s unclear if The Washington Post will take the advice of the author but it’s evident the Bezos-owned publication has a hard time passing up a good virtue signaling opportunity, even if it comes at the expense of their own outlet.

The District of Columbia, named for Christopher Columbus. Washington, D.C.

George Washington University has to go. So does the Washington Monument. Same with the Thomas Jefferson Monument, and the Lincoln Memorial. Theodore Roosevelt Island just outside D.C. must go too.

Let’s just make it official: Anything named for a dead white male in the United States of America must be renamed. Whiteness is a pejorative in 2022 America. Thus, anything celebrating whiteness must be extirpated. This is the lingua franca uniting the ruling elite: Whiteness is inherently insidious, thus all glorifications to America’s white past must be removed. To celebrate that past is a heresy to the glorious, non-white future in their eyes.

As one who long ago argued it’s time to wake up from the American Dream said, “I support renaming Washington. And the District of Columbia for that matter. It’s important to show that the current System has no relationship with what the Founders created. And the currently existing city is worth less than the dead bones of Washington and Columbus.”