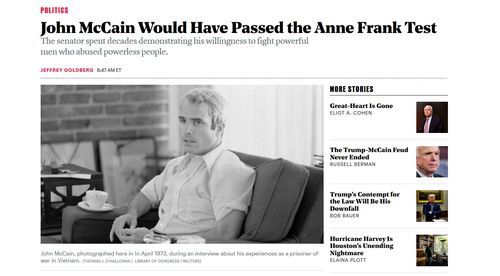 Jeffrey Goldberg In THE ATLANTIC: "John McCain Would Have Passed the Anne Frank Test"

From the Editor of The Atlantic:

John McCain Would Have Passed the Anne Frank Test

A decade ago, on one of his seemingly countless visits to Iraq, John McCain, who was generally immune to the charms of introspection—“Stop trying to get me on the couch, you shit” he once said, smiling, when I tried to encourage him toward self-analysis—talked about the dominion of human cowardice, and the story of Anne Frank, in a way that I found startling.

We had been discussing the American war in Iraq, which he supported steadfastly, even after everything went sideways. The cause, he said, was just. The execution, at least until the troop surge of 2007, was a disgrace, but this didn’t move him off his principles. “I hated Saddam,” he said. “He ruled through murder. Didn’t we learn from Hitler that we can’t let that happen?” His hatred of Saddam, like his hatred for all dictators, burned hot; his contempt for Donald Rumsfeld, George W. Bush’s first defense secretary, was ice-cold. It was Rumsfeld’s arrogance and incompetence, McCain believed, that helped discredit the American invasion. “He was the worst,” McCain said.

I offered a qualified dissent in response. I supported the invasion for more-or-less the same reason McCain did—I wanted to see the Kurdish people, the preeminent victims of Saddam’s genocidal fury, suffer no more. But unlike McCain, I had come to believe that the theory of the American case was no match for heartbreaking Middle East reality. I wasn’t sure that even the most perspicacious secretary of defense could successfully lead an effort to renovate a despotic Middle Eastern country. I suggested to McCain that this sort of grandiose undertaking was not necessarily a core competency of the United States. “But genocide!” he said. “Genocide!” His argument was not only concise, but morally superior. Not analytically superior, but morally, no doubt.

We spoke every so often about the Holocaust, and its supposed lessons (one lesson, he told me once, in a mainly, though not entirely, devilish way, was that Jews should be well-armed). He said that, in the post-Holocaust world, all civilized people, and the governments of all civilized nations, should be intolerant of leaders who commit verified acts of genocide. That, he suggested, is the most salient lesson of all.

I told him then that he would most definitely pass the Anne Frank Test. He was unfamiliar with the concept (mildly surprising, given that his best friend was Joe Lieberman). The Anne Frank test, something I learned from a Holocaust survivor almost 40 years ago, is actually a single question: Which non-Jewish friends would risk their lives to hide us should the Nazis ever return?

Did anybody pay a career price for being wrong about Iraq in 2002-2003? Barack Obama received a career boost for making a single sensible speech in 2002 opposing invading Iraq; but it’s bizarre how many people who pushed for the single dumbest policy decision of the 21st Century wound up with high honors in their field, such as McCain getting the 2008 GOP nomination and Goldberg being made the editor of The Atlantic.