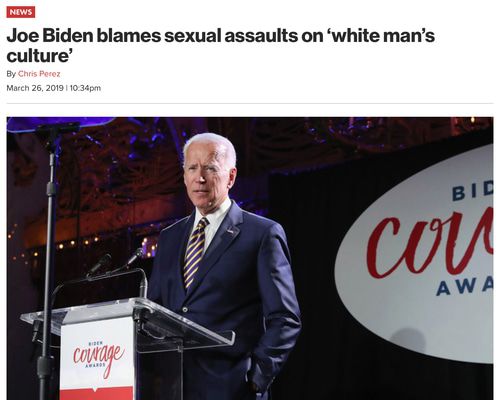 Joe Biden Blames Rape On ‘White Man’s Culture’—Does He Have ANY IDEA What Black And Hispanic Rape Culture Is Like?

Women have been suffering in “a white man’s culture” — which has continually turned a blind eye to sexual assault and misconduct, according to former Vice President Joe Biden, who propped up Anita Hill as an example.

“To this day I regret I couldn’t come up with a way to give her the kind of hearing she deserved,” Biden said Tuesday while speaking at an event to combat sexual violence on college campuses.

“But I also realized there was a real and perceived problem the [Senate Judiciary] committee faced: They’re a bunch of white guys.”

The 76-year-old Democrat continued, “No, I mean it sincerely — a bunch of white guys…hearing this testimony. So…when Anita Hill came to testify, she faced a committee that didn’t fully understand what the hell it was all about.”

“You know how different nations have stereotypes of each other? Germans are methodical, Italians excitable, Scandinavians dour, the Chinese love gambling, and so on? Well, one stereotype of Americans that I grew up with in England—it goes all the way back to colonial times—was that American men are terrified of their women.”

I just did a column on Hispanic rape culture, and black rape culture is evidenced in rap music and crime statistics.

The word machismo is not an Ango-Saxon word, it's a Mexican Spanish word. In terms of numbers, Richard Lynn has written that

The rate for rape is about five-and-a-half times greater for blacks than whites, and two to three times greater among Hispanics and Indians as compared to whites, while East Asians commit rape at about half the white rate.

While they talk (over and over again) about Donald Trump's misogyny, Trump started his campaign in 2015 by running against the Mexican rape culture describe in Adios, America. This speech by Biden is absolutely insane.