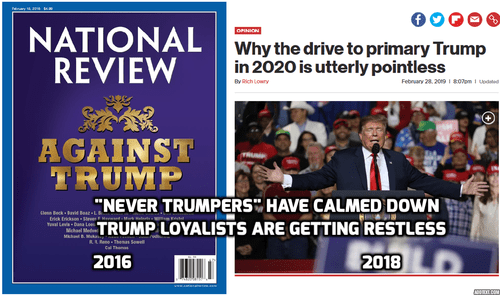 John Derbyshire On The Taming Of The Never Trumpers Vs. The Disappointment Of The Base

You all know about the Never Trumpers—those neocons and Reaganites back in 2016 who told us Trump was utterly unsuited to be President by flaws of character and errors of policy.

A few of the Never Trumpers have stayed true to that original spirit of seamless hostility to all things Trump. Most, though, have swung round to grudging support for the President. Looking at the menagerie of candidates shuffling into position for the Democratic nomination next year, you have to be as hardened, as committed a neocon as Max Boot [Email him] to not see Trump as the lesser of two evils.

What about those disqualifying character flaws? A conventional wisdom has settled in on that—I mean, among the Former-Never Trumpers. Approximately: If sixty-three million voters were willing to overlook those flaws, why shouldn't we? Do we have representative government, or what? Trump featured regularly in the tabloid press for twenty years before he ran for President. Nobody had any illusions about his character.

My old boss Rich Lowry [Email him] illustrates the shift towards acceptance. Rich's latest column bears the title: Why the drive to primary Trump in 2020 is utterly pointless. Rich points out that significant primary challenges to sitting Republican Presidents come from the right: Reagan in '76, Buchanan in '92. Sample quote:

Trump is in a stronger position in the party now than he was then. He has been a rock on judges, abortion and religious liberty. Last time, many Republicans told themselves, "Well, at least compared to Hillary Clinton, we don't know what we're getting with Trump."

Now, they are grateful for what they've gotten.

Call this the taming of the Never Trumpers. What we have gotten from Trump looks pretty meager to me; but yes, a great many voters are grateful for it none the less. I hear from those voters in my email bag every time I call the President lazy and incompetent. I categorize them in my mind as Ever Trumpers. They'll vote for him enthusiastically, no matter what.

Meanwhile, as Never Trumpers like Rich Lowry have been migrating over to the Trump side, however grudgingly, and Ever Trumpers are cheering the President on at rallies, a lot of us who were keen supporters of Trump in 2016 have drifted the other way, waving at Rich Lowry as we pass, headed in opposite directions.

It's too soon to call us Former Trumpers. I can't imagine voting Democrat in 2020; and I agree with Rich that a primary challenge is a box canyon … although I had to look up "box canyon." Go easy on the metaphors there, Rich, for the sake of us immigrants.

Here is the shift in a nutshell, as I see it.