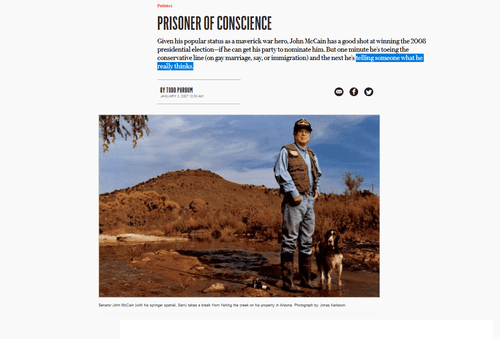 John McCain Dies, Honored By MSM In Death As In Life As A "Maverick"—Meaning Disloyal To Party And Country

When Ted Kennedy died in 2009, I blogged this Hilaire Belloc poem as Quote Of The Day:

The Politician's corpse was laid away.

While all of his acquaintance sneered and slanged

I wept: for I had longed to see him hanged.

[Epitaph On The Politician Himself, Hilaire Belloc]

Now John McCain has passed away, I feel much the same.

The MSM, on the other hand, is likely to be unconsolable, to judge by the alerts popping up on my iPhone. 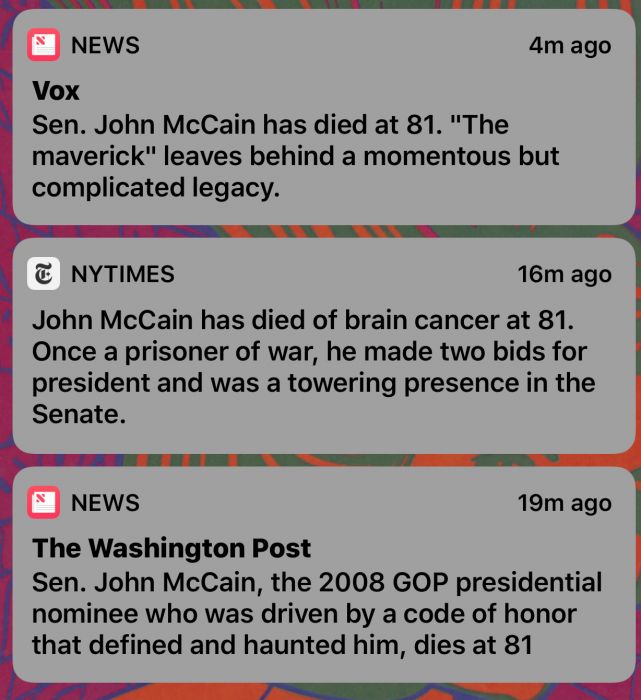 All this "Maverick" stuff means in McCain's case is that he was disloyal to his Party, disloyal to the voters who elected him, and disloyal to his country, especially when it came to immigration and  the Mexican border.

This is typified by a 2007 profile in left-leaning Vanity Fair, the subhead of which was:"Given his popular status as a maverick war hero, John McCain has a good shot at winning the 2008 presidential election—if he can get his party to nominate him. But one minute he’s toeing the conservative line (on gay marriage, say, or immigration) and the next he’s telling someone what he really thinks."

And here's an example of this:

"Then he added, unable to help himself, 'By the way, I think the fence is least effective. But I'll build the goddamned fence if they want it.'” [Prisoner of Conscience, Vanity Fair, February 2007]

That's bad: if he thought there was a better way to protect America from illegals (interior enforcement, a Deportation Force) he should have supported that. What he  did was worse—he pretended to support a fence until he was reelected, and then changed his mind. [After Dismissing Fence, McCain Touts It in Ad, by Jonathan J. Cooper, Associated Press, May 13, 2010]

At the end of his life he was attacking Trump and American nationalism itself in a speech he gave after accepting an award from...Joe Biden:

To fear the world we have organized and led for three-quarters of a century, to abandon the ideals we have advanced around the globe, to refuse the obligations of international leadership and our duty to remain ‘the last best hope of earth’ for the sake of some half-baked, spurious nationalism cooked up by people who would rather find scapegoats than solve problems is as unpatriotic as an attachment to any other tired dogma of the past that Americans consigned to the ash heap of history.

Perhaps now that he's gone, he'll be replaced by an Arizona Senator who will be loyal to the United States of America.