Journalists Face The Union Of Their Greatest Foes, Taylor Swift And Free Speech

There are two things the System media hates above all other things (well, besides Russia). The first is people freely discussing ideas. The second is Taylor Swift [The End of White Celebrity, by Gregory Hood, American Renaissance, November 17, 2017].

Now, we have a story which combines both. Taylor Swift apparently has an app which is a kind of social network for her fans. Some of her fans are evidently not leftists. They use said app to communicate. Media meltdown ensues.

And so on. Pages of this stuff. (My favorite is Kaplan's kvetch about the app as a "cesspool of pro-Trump politics.")

The overall objective of these hysterical shrews is to get Swift to denounce her right-leaning fans, a quest which has become something of an obsession for journalists.

Swift was officially denounced by the Guardian editorial board for not complaining about the president.

She's been condemned for being nominated for awards instead of blacks.

She's been called a racist for using Africa for a setting for a music video. 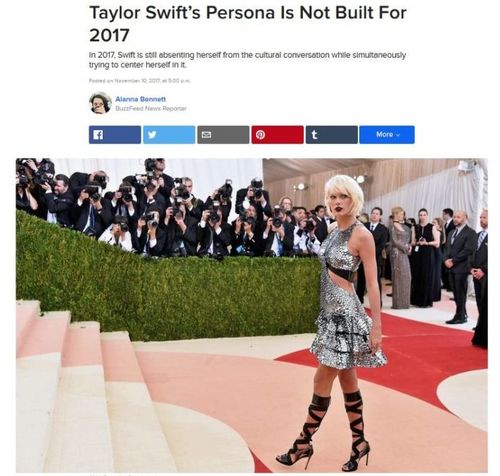 As near as I can tell, she was criticized by Buzzfeed for being white and simply existing. It's perhaps relevant another a Buzzfeed editor recently tweeted all she wants for Christmas was "full communism." [Buzzfeed editor: 'All I Want For Christmas Is Full Communism Now,' by Jon Levine, The Wrap, December 18, 2017]

We aren't at full communism yet, but we're getting there. We're already close to full Cultural Marxism. We're definitely at the point where there is an official ideology, with heroes and villains established by decree and narratives you are required to believe in.

And just as it's dangerous to be the first one to stop clapping, you aren't allowed to remain silent when the Party and its commissars (journalists) say it's time for a Two Minutes Hate.