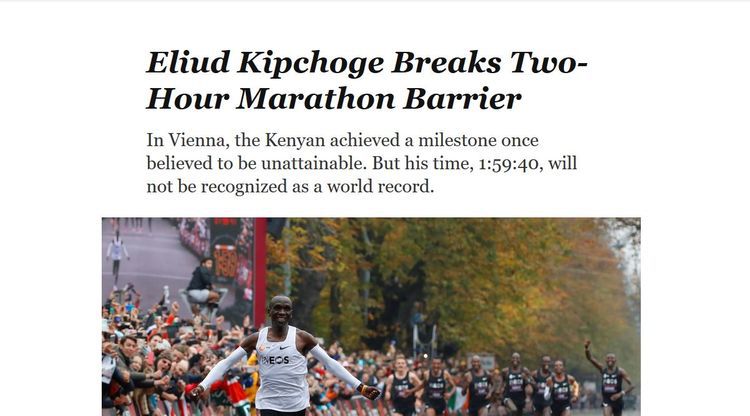 In Vienna, the Kenyan achieved a milestone once believed to be unattainable. But his time, 1:59:40, will not be recognized as a world record.

VIENNA — On Saturday morning in Vienna, on a course specially chosen for speed, in an athletic spectacle of historic proportions, Eliud Kipchoge of Kenya ran 26.2 miles in a once-inconceivable time of 1 hour 59 minutes 40 seconds.

In becoming the first person to cover the marathon distance in less than two hours, Kipchoge, 34, achieved a sports milestone granted almost mythical status in the running world, breaking through a temporal barrier that many would have deemed untouchable only a few years ago.

Still, the eye-popping time will not be officially recognized as a world record because it was not run under open marathon conditions and because it featured a dense rotation of Olympic pacesetters.

This wasn’t a public marathon with thousands of participants, it was a one man about four times around an extremely flat and mostly straight course, with a pacing car and human pace-setters recruited from top athletes like Matthew Centrowitz, the U.S. gold medalist in the 1500m in the 2016 Olympics.

Kipchoge is from the Nandi district of the Kalenjin highlanders of Kenya, who have furnished so many famous runners, such as Kipchoge Keino, who defeated the American Jim Ryun at 7,300 feet elevation in the 1968 Mexico City Olympic Games famous 1500m race. (Kenyan runners re-use a lot of the same names, so they can be confusing.)

The current Kipchoge now lives in the Kenyan city of Eldoret, which varies between 7,000 and 9,000 feet of elevation. It’s surrounded by pleasant rolling grassland with a pleasant climate: In all 12 months, the average high temperature is in the 70s F. The all-time maximum high is 87 F and the all-time max low is 34 F (i.e., pretty nice).

John Manners hypothesizes that the Kalenjin evolved to be ideal horseless cowboys. When a calf strays, Kalenjin herders track him down, but on foot, not on horse like in 19th Century America, which selects for fast distance runners.

Sometimes, the lusty youth of one tribe would go raid the cattle of another tribe and run them home, pursued by their victims.. The slower young bravos would get a spear in the back from their pursuers, while the faster would get home and get several brides.