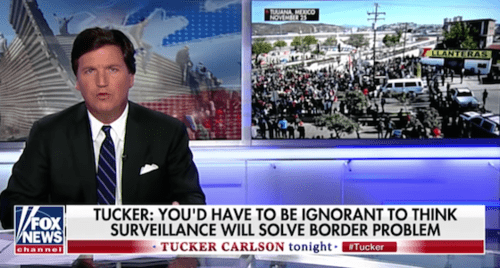 Latin America Is Melting Down, Yet Democrats Say A Wall Is Unnecessary

Lists can be very revealing, and Tucker Carlson compiled a good one on Thursday’s show, indicating a troubling instability among several of America’s national neighbors to the south, specifically Mexico, Nicaragua, El Salvador and Venezuela.

Unfortunately, the explosive population growth of Latin America and elsewhere in the Third World is rarely mentioned as a major push factor for illegal immigration. For example, the number of Hondurans has quadrupled since 1960, which is not a plus in a backward country where 40 percent of the population works in agriculture.

In Gallup’s most recent global estimate, between 2015 and 2017, 15% of the world’s adults — more than 750 million people — said they would like to move to another country permanently if they could. In Central America, this percentage is one in three (33%), or about 10 million adults.

Three percent of the world’s adults — or nearly 160 million people — say they would like to move to the U.S. This includes 16% of adults from Honduras, Nicaragua, Guatemala, El Salvador, Panama and Costa Rica, which translates into nearly 5 million people.

World population growth should be a major part of the immigration debate, but it is rarely even mentioned.

Tucker noted the many lies from Democrats about border security: like other servants of the globalist elites, they really prefer open borders to keep those future voters and cheap workers coming.

TUCKER CARLSON: So, what exactly is the Democratic Border Security proposal? Would it actually secure the border? Well we had some time today, so we checked. And in a word, no, it would not.

The Democratic bill, in the Senate that Ed was just telling you about, simply restores previous funding levels for the Border Patrol and other existing programs. So, you have to ask yourself, when you consider that, was the border secure in December before the shutdown?

Well, no, it wasn’t. And that’s why we’re having this debate right now. Then, how would it be more secure after a bill that doesn’t change anything passes? Well, it wouldn’t be more secure, and that’s the point of the legislation, to maintain the broken status quo, let’s be honest about that.

Meanwhile, in the House, Homeland Security Committee Chairman, Bennie Thompson says he plans to introduce a bill that contains billions for border security, but nothing for a wall.

Thompson has a brand-new idea, he’s telling us. He says he can secure the border with the marvels of technology. He recently told PBS that cutting-edge machines can help us, quote, identify those vulnerabilities on the border.

Thompson’s plan can expect enthusiastic support from the Congresswoman from Tech-Land, Speaker of the House, Nancy Pelosi. Here’s her most recent suggestion for the border. Watch.

SPEAKER NANCY PELOSI: The positive, shall we say, almost technological wall that can be built is what we should be doing.

Technology to scan the cars coming through the ports of entry, and that is to detect guns. It’s like an electronic dog almost to detect drugs, guns and other contraband.

CARLSON: It’s really like an electronic dog that can detect contraband. On one level, that’s hilarious. We’ve laughed about it before. But it’s also patronizing, really. You’d have to be totally ignorant of what’s happening on our southern border to believe that more surveillance is going to solve the problem.

We have an awful lot of surveillance technology there already. We’ve got drones, cameras, sensors, radar, dirigibles. We have it there, in part, because the Bush Administration put it there. That administration spent more than a billion dollars on something called the Secure Border Initiative Network.

They use technology to watch about 50 miles of our Southern border. Congressman Bennie Thompson himself called that program “Grave and expensive disappointment.” Well Thompson was right about that.

Leaving the politics aside, it’s not a good idea because our southern border is one of America’s most dangerous vulnerabilities. That’s not a talking point. It’s literally true, and here’s why.

As of tonight, Mexico is an intact country. Will it remain an intact country? Maybe but maybe not. Mexico is a deeply unstable place, not an attack on the Mexican people. It’s an acknowledgment of what anyone who knows anything about the country will tell you.

The national murder rate in Mexico is five times ours. Since 2006, more than 250,000, a quarter million people have been murdered in Mexico. That includes hundreds of politicians and judges. There is a war going on there, and it’s spurred by drug cartels that reach into the highest levels of the Mexican government, not an exaggeration.

The Attorney General of an entire Mexican state recently pleaded guilty to drug trafficking charges. The governor of a state on the U.S. border took bribes to let cartels operate freely, which they did.

And then, just the other day, Mexico’s previous President was credibly accused at trial in court by a witness of taking a $100 million bribe from “El Chapo” Guzman. In effect, Mexico has become a narco-state.

But it’s not even the most volatile country in the region. Nicaragua is in severe turmoil right now. That gets no coverage but it’s real. Parts of El Salvador are largely controlled by gangs. Venezuela, meanwhile, is literally falling apart.

A recent Brookings Institution report predicted that a total collapse of Venezuela, which could happen any day, might create eight million refugees. For perspective, that’s more refugees than fled the entire Syrian Civil War. And keep in mind that that flood of humanity upended all of Europe.

Something similar could easily happen here, to us, and it likely will, if we ignore the problem, which we are doing. And yet, the position of Democrats in the Congress is that everything is fine, and you’re nuts if you disagree. Nothing needs to be done.

Well that’s the definition of recklessness. In fact, it’s worse than recklessness. It’s like letting your kids play in traffic. You wouldn’t do that to people you cared about. You prevent it from happening.

Democrats have become extremists on the question of borders. But you never know that from watching television or reading the paper. The media won’t say it, and nor will most Republicans, by the way.

Even in the Trump Administration, some officials seem intent on making Nancy Pelosi’s case for her. The Republicans are the real extremists here.

Here’s what Commerce Secretary, Wilbur Ross said today when he was asked about workers who aren’t being paid during the shutdown.

SECRETARY WILBUR ROSS: The people might have to pay a little bit of interest, but the idea that it’s paycheck or zero is not a really valid idea.

There have been ads run by a number of the public-sector credit unions.

Those have announced very, very low interest-rate loans to bridge people over the gap.

CARLSON: So, more debt, more interest payments, that’s the solution? No, it’s not. Those are the last things that most Americans need. That was an idiotic thing to say. Look for Wilbur Ross’ words to be aired every day for the next three years on CNN. They know a propaganda win when they see one, and it’s a shame.

And it’s also a distraction because it doesn’t change the nature, the fundamental nature of this crisis.

Our borders remain vulnerable, and the stakes are higher than they have ever been, thanks to the chaos just south of them. Leaders who cared about this country would be staying up late, trying to fix that problem. Democratic leaders are trying to make it worse. That’s the bottom line truth.