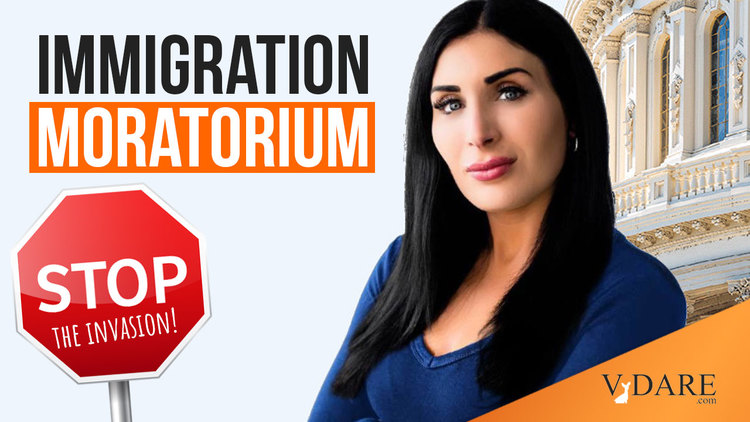 Recently I noted that, while VDARE.com does not endorse political candidates, I personally maxed out to Neil Kumar, who was challenging the Walmart-supported GOP incumbent Rep. Steve Womack in Arkansas’ 3rd Congressional district. I supported Kumar for the same reason I maxed out to the heroic Lauren Witzke in her 2020 Delaware Senate race: both explicitly raised the issue of an immigration moratorium.

Despite massive censorship and deplatforming, Kumar ultimately got some 22% of the vote, striking a real blow. But what made my contribution worthwhile, in my eyes, is that Kumar also forced his opponent to go on the record about an immigration moratorium, revealing of course that he’d never thought about the issue at all and simply accepted the Cheap Labor Lobby’s line.

Loomer said she supports the mass deportation of millions of people living in the country illegally and halting immigration to the United States for 10 years.

Webster doesn’t think such a measure is realistic.

“You can say round people up and whatever,” he said. “That’s been around for a long, long, long time, and no one has done it because there’s a lot more to it than that. But I do believe we need to get control of our border. When we do that, the need for that kind of thing is going to be way diminished.”

Note that Webster does not address Loomer’s call for a moratorium on legal immigration at all—quite probably he’s never heard of the idea in donor meetings and country clubs. And he appears to be completely nonplussed by her idea of mass deportations of illegals, i.e., he’s never heard of President Eisenhower’s Operation Wetback.

Needless to say, even getting “control of our border” (why only now?) would not redress the economic displacement and political damage that America’s post-1965 immigration disaster has done. Why not abolish Birthright Citizenship?

I consider my support of Laura Loomer to be one small step for a donor—but a giant leap for immigration patriotism.

Inexorably, the immigration moratorium issue will surface in U.S. politics.

But maybe we need an Immigration Moratorium PAC to hurry it along.