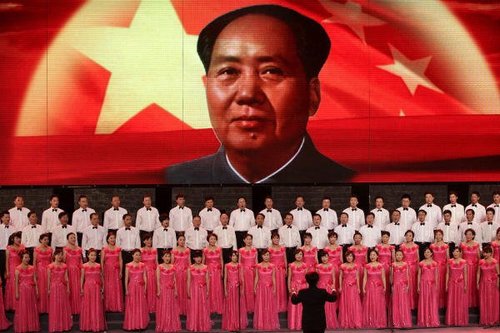 Leon Wolf at RedState, who we've dealt with before, has what may fairly be called a blood libel against NumbersUSA, FAIR, and other mainstream restrictionist groups:

This is something that needed to be said. https://t.co/ox7tlhHURB

No, it wasn't something that needed to be said, it's nonsense. Wolf [Email him] says that since many immigration restrictionists believe in population control, their "philosophy" created the murderous "one child" policy of the Communist dictatorship, which Chinese officials have often enforced by killing Child Number Two,generally in the kind of late-term abortions that feminists defend, but occasionally in Kermit Gosnell-style infanticide.

Wolf has all kinds of links, one to a Foreign Policy article which blames Population Bomb author  Paul Ehrlich for China's policy, without, as far as I can see, proving that China's leadership was influenced in any way by a '70s futurist who appeared on the Johnny Carson show.

The anti-amnesty movement should know who they are getting in bed with. NumbersUSA, FAIR, CAPS and the like are not good conservative folks who want the sovereignty and fiscal health of the United States to succeed – they are extremist environmentalist whack jobs who oppose immigration to the United States primarily because they know that America is wealthy enough for immigrant families to support more children; their hope is to keep them in poverty and hopelessness so that they will be more aggressive about “family planning.”

Well, not so much keep them in poverty and helplessness, as in Mexico. It's quite true that Mexicans who move north of the border have more children, because they don't have to pay for their education, et cetera.  I deny that the US is rich enough to pay for this—no country is. And why should the US allow it?

That is why, before founding FAIR and becoming a hero of the anti-amnesty movement, John Tanton was the founder of Northern Michigan Planned Parenthood and was a Sierra Club organizer. That is why, before realizing that the Democrat party was abandoning the immigration for good, NumbersUSA President Roy Beck repeatedly and openly groused about the need to embrace “population control” as an environmental issue.

If you’re a conservative anti-amnesty activist who wants control over the border, respect for United States laws and sovereignty, but doesn’t want forced abortions, sterilizations, radical environmentalist wackoism and anti-Catholic bigotry, then NumbersUSA, FAIR, and CAPS are not your friends. To them, the former are only useful as incidents to the latter, and you are only useful to the extent that you support their leftist ends, not your own conservative means.

And that's the blood libel aspect of it—Wolf is saying the people like Roy Beck and FAIR's Dan Stein are more interested in killing babies than they are in preserving the United States. And he's using this as an attempt to drive them out of the public discussion of amnesty. Email him and ask why.