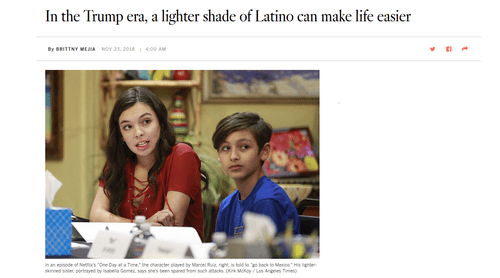 The Los Angeles Times used the long holiday weekend to spew its anti-Trump baloney on citizens enjoying some time off. Its Friday front page contained the headline, “Dark-skinned Latinos see deeper shade of bias,” followed by a story and “victim” photo. Curiously, they paper didn’t respect her enough to use a decent picture. 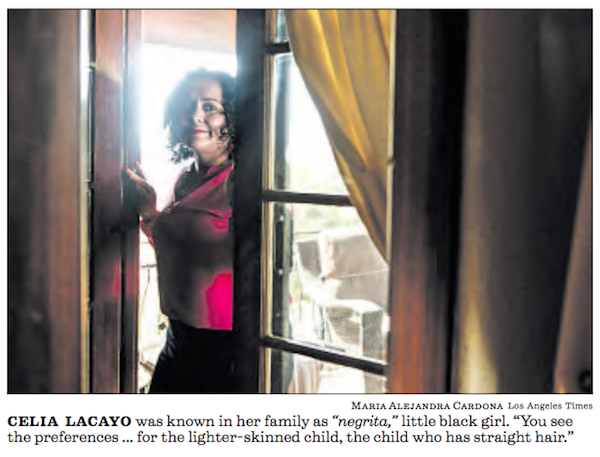 Note that the Times own caption read in part, “Celia Lacayo was known in her family as ‘negrita,’ little black girl.” Perhaps her skin color issue has more to do with family conflict than anything political.

Nevertheless, the Times claims that the Trump presidency is responsible for unleashing racist sentiments and offered several examples, even including one from Mexico.

So did President Trump really stir up skin-color racism in Mexico? Such a cause would be odd, since Mexico already had plenty of racial discrimination, just like the rest of the planet.

In pre-Trump 2010, the LA Times (!) reported in an article titled Racism in Mexico rears its ugly head:

The issue of racism in Mexico exploded a few years back when then-President Vicente Fox, in what was meant to be a defense of Mexican immigration to the United States, told a U.S. audience that Mexican immigrants were necessary because they performed the jobs that “not even blacks” wanted to do.

He had to apologize and receive a visit from Jesse Jackson to atone. As the furor died down, another popped up when Mexico printed postage stamps that commemorated a well-known comic-book character from the 1950s, Memin Pinguin. The character is a black boy drawn with exaggerated features. It was seen as racist by many in the U.S. who demanded Mexico withdraw the stamps; many in Mexico, including several leftist intellectuals, defended Memin Pinguin as a beloved part of Mexican culture. (Withdrawing the stamps became a moot point when they sold out within hours of going on market.)

Naturally, the internet has pictures of the objectionable stamps which caused quite a cross-border furor in 2005:

But the Times thinks racism is worsened in America because Donald Trump is president. Its writers need to spend more time observing human nature.

Over her 42 years, Lisette Flores’ brown skin has at times struck at a rich vein of insecurity.

In the more mundane moments, she’s been quizzed about her background, whether she’s Mexican or Native American. In college, the young woman taking her ID photo offered to lighten the shade in the background to make her look less dark.

In Mexico, a bouncer at a nightclub looked down at her and asked if the others in her group looked like her — far from the blond, light-skinned women often featured in the country’s popular telenovelas.

In January, her darker skin made her a target of a more politically fashionable attack.

As Flores walked back from lunch, she encountered a group of Trump supporters protesting outside the Arizona state Capitol building in Phoenix.

“Go back to Mexico!” a woman shouted, singling Flores out of a group of six. Two light-skinned Latinas escaped the stinging words.

Colorism — a subset of racism that rewards light skin and more Anglo features and penalizes dark skin and more indigenous features — long has affected how people are perceived in this country. But it has contributed an extra layer of angst in the Trump era, as the rhetoric around immigration draws attention to those whom some people, with seemingly more audacity than before, judge as not belonging.

“I’ve never committed a crime, I try to be a good neighbor, a good friend, a good person,” Flores said.

“And to know that any contribution, however big or small I’ve done, is seen as irrelevant in certain eyes because I’m not blond-haired, or blue-eyed or light skin-colored, that all I’m seen as is somebody that … they consider as an invader, as an alien, as a criminal, is disheartening.” (Continues)

President Trump wants border security against the billions on earth who would relocate in America if they could, and that makes him a racist in the eyes of liberal scribblers.