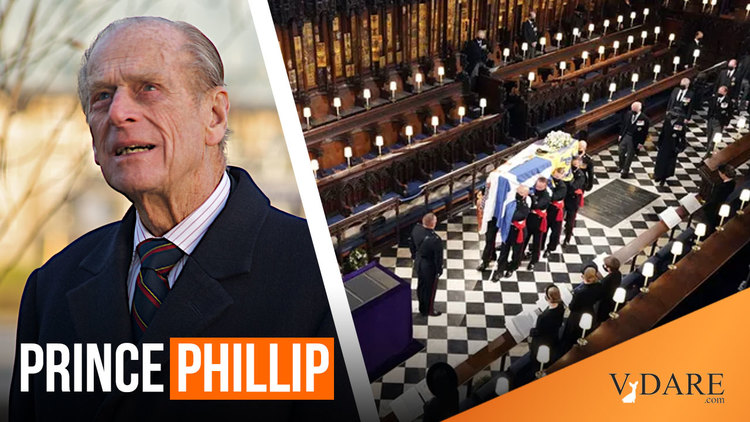 Low blow of the week, and repulsively disgusting even for the British Broadcasting Corporation, which God knows is saying something, was this one concerning Prince Philip's funeral today. You need to know that attendance at the funeral has been limited to thirty because of pandemic restrictions.

Some reptile named Jeremy Vine was conducting a chat show on BBC's Channel 5 with a guest, a Brit radio personality named Shay Grewal, a lady of Indian ancestry. The reptile asked Ms. Grewal a question.

We are going to see a group of 30 people at this very restricted funeral, and I imagine it will be 30 people who are white. I'm just trying to think whether there's anybody of color in there and I don't think so.

Do you think that's a problem?

Ms. Grewal replied that, no, she didn't think it was a problem because: "At the end of the day, the Royal Family are a family."

When I was a kid in England the BBC was an institution we respected. We looked to it for entertainment and information. Now it's the domain of pond scum like this Jeremy Vine. What a falling off was there!

Below, via the Sun, the family members who will be attending, are in fact all white.