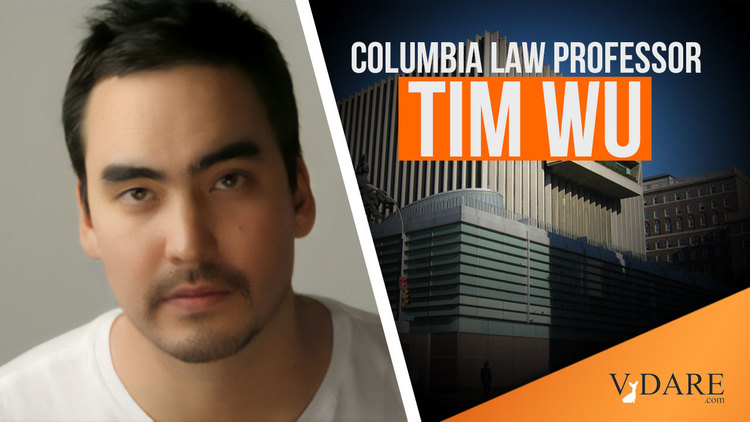 A couple of weeks ago in Matt Taibbi, Censored Out Of MSM Despite Ducking On Immigration, Strikes Back I wished Taibbi well at his new Substack perch, saying:

No matter how much discretion he employed, this extraordinarily talented writer has now had to go out on his own via Substack. This is an appalling comment on the American MSM.

Taibbi has now drawn on his MSM scars to post an exceptionally important piece: A Biden Appointee's Troubling Views On The First Amendment

Columbia law professor Timothy Wu… is among the intellectual leaders of a growing movement in Democratic circles to scale back the First Amendment. He wrote an influential September, 2017 called “Is the First Amendment Obsolete?” that argues traditional speech freedoms need to be rethought in the Internet/Trump era….

“In some cases,” Wu writes, “this could mean that the First Amendment must broaden its own reach to encompass new techniques of speech control.”

The essay then wanders off into a subtle and complex discussion of the relationship between the Democrats and Big Tech, saying:

Do these members of congress, or thinkers like Wu, want to break up these monopolies, or harness them? To date, the answer has run decidedly in one direction. Previous congressional hearings involving tech CEOs…already resulted in an overt partnership between Washington and Silicon Valley over “content moderation” decisions.

VDARE.com is only too well aware what this has meant.

It is very important to keep in mind what the issue is here. Forget all the sententious verbiage being generated here: what Wu and his like want is to suppress opposition arguments because they keep losing to them. If their arguments were superior, they would not need repression. And after 70 years of building uniformity in the MSM, to their inexpressible dismay and rage, the internet seemed to be letting the Peasants communicate.

But I think there is another issue here, one which it would be too much to expect Matt Taibbi to raise.

What are the chances that Timothy Wu [Email him/Tweet him], whose forbears lived for thousands of years in a sophisticated culture with zero freedom of speech or anything remotely resembling the Anglo-Saxon political process, would have any respect for or even understanding of the concept?

If you have any doubts about the answer to this, read one of John Derbyshire’s greatest VDARE.com articles: Importing Sino—Fascism?

(It is true that Wu’s mother is an Englishwoman—which does not mean much nowadays—but then again he seems to have been educated mostly abroad.)

In political matters, intellect is not enough. There is a moral dimension.