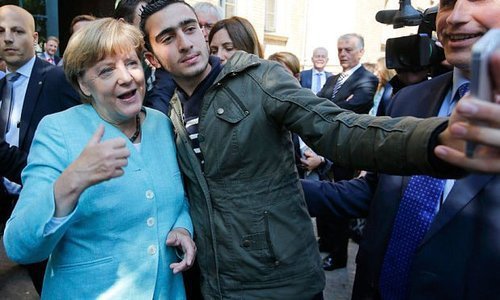 Merkel's Boner: The Gift That Keeps on Giving; Merkel to Keep Out 19 Million Syrians by Letting in 79 Million Turks

Chancellor Merkel is starting to notice that her decision to unilaterally trash E.U. rules and let in countless Muslim from Syria (population 19 million) and who knows from where else maybe isn’t quite working out so hot. But, don’t worry, she’s come up with a new solution to fix her old solution: She’ll get the Turks to stop the Syrian invasion of Europe!

In return, she’ll merely give 79 million Muslim Turks the right to move to Europe.

ISTANBUL — Desperately seeking help to contain Europe’s migrant crisis, Chancellor Angela Merkel of Germany on Sunday explicitly linked accelerating Turkey’s effort to join the European Union to Turkish cooperation in clamping down on the flow of refugees from Turkey to Europe.

Ms. Merkel, who has long opposed Turkey’s admission to the bloc, said she would support speeding up the process, a concession that underscored the importance European leaders place on Turkey’s cooperation in trying to contain what has become the largest flow of migrants since World War II, as people flee violence and deprivation in the Middle East and Africa.

“No country can shoulder the refugee burden alone,” Ms. Merkel said at a news conference with Prime Minister Ahmet Davutoglu of Turkey in Istanbul on Sunday. “The job has to be shared.”

For weeks, a deal in principle between Europe and Turkey has been discussed: it would include almost three billion euros, or about $3.4 billion, to help Turkey deal with nearly 2.2 million refugees, mostly from Syria, who now live in Turkey. At the news conference, Ms. Merkel and Mr. Davutoglu said no agreement had been finalized and that the details were still being worked out. …

In the early evening, Ms. Merkel met with Mr. Erdogan, Turkey’s pre-eminent decision maker, and they also discussed the migrant crisis, as well as the European Union accession process and counterterrorism.

In a statement, Mr. Erdogan said he had asked Ms. Merkel for support in accelerating Turkey’s efforts to join the union.

…. In the negotiations, Turkey has made visa-free travel to Europe for its citizens a top priority, and Ms. Merkel said she had agreed to push that issue forward. Turkey is the only country that has been formally accepted for possible membership in the union whose citizens must have visas to travel to Europe.

Turkey has long sought to join the European Union — formal talks began in 2005 — but the process has stalled in recent years, partly because of European concerns about Turkey’s human rights record and a government crackdown on the news media and freedom of expression.

And also because Turkey is filled with Muslim Turks, who, once included in the E.U. Schengen Zone, would be entitled to move anywhere they felt like. Here’s a 2004 VDARE article I wrote on Turkey’s attempt to get into the E.U. Back in 2002, Randall Parker cited French elder statesman Valery Giscard-D’Estaing’s frank talk about what adding Turkey to the E.U. would mean for Europe:

Mr Giscard d’Estaing told Le Monde that Turkey’s capital was not in Europe, 95% of its population lived outside Europe, and it was “not a European country”.

Asked what the effect of including Turkey in a future wave of European enlargement would be, he said: “In my opinion, it would be the end of Europe.”

Underlining his opposition to Turkish membership of the EU, Giscard d’Estaing said that letting non-European countries join the 15-member club would be “the end of the European Union.”

“The day after you open negotiations with Turkey, you would have a Moroccan demand (for membership of the union,)” said the 76-year-old politician.

Giscard’s comments reflected in blunt language what many EU politicians whisper privately, but they come at a particularly delicate time when Brussels needs Turkey’s cooperation to try to solve several problems related to enlargement.

But, now due to Merkel’s unforced error, own goal, whatever sports metaphor you want to use, the E.U. is begging Turkey not the other way around. From the Financial Times:

Commission officials briefed EU ambassadors on Thursday on the Turkish requirements for completing the terms of the action plan, including €3bn in fresh funds; unblocking about five chapters in Turkey’s EU membership negotiations; and visa-free access for 75m Turks to the Schengen border-free area from as soon as 2016.

Holy cow: “visa-free access for 75m Turks to the Schengen border-free area from as soon as 2016.”

The NYT article doesn’t mention the world “Schengen,” but does go on to mention that the Turkish government doesn’t have the world’s best human rights record. But, due to Merkel’s Boner, Europe is looking for its salvation to the tender mercies and transparent stratagems of the Top Turk.

If this reminds you of a Simpson’s episode about fighting invasive Bolivian tree lizards by unleashing wave after wave of Chinese needle snakes, well, you’ve come to the right place.