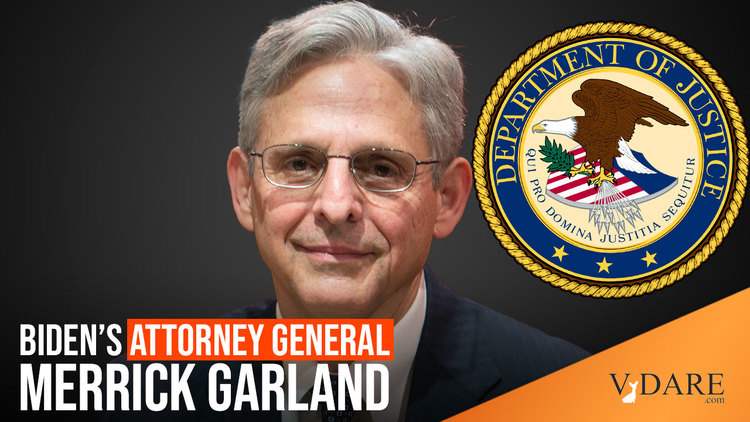 Garland, who was famously nominated for the Supreme Court but never confirmed, said the situation with domestic terrorism is worse than it was around the time of the Oklahoma City bombing. “I think this was the most heinous attack on the democratic process that I've ever seen, and one that I never expected to see in my lifetime,” he said of the Capitol protests. He promised “all of the resources” to make more arrests [Garland pledges to prioritize domestic terrorism battle, by Rebecca Beitsch, The Hill, February 22, 2021]. (VDARE.com, of course, has demonstrated that the protests were ludicrously exaggerated by the Regime Media).

Garland doesn’t share the same zeal for going after Antifa insurrectionists. He told Sen. Josh Hawley that the Leftists’ crimes don’t matter because they occurred at night:

Garland: Well, Senator, my own definition, which is about the same as the statutory definition, is the use of violence or threats of violence in attempt to disrupt the democratic processes. So an attack on a courthouse, while in operation, trying to prevent judges from actually deciding cases, that plainly is domestic extremism, domestic terrorism. An attack simply on a government property at night, or any other kind of circumstances, is a clear crime and a serious one, and should be punished. I don’t know enough about the facts of the example you’re talking about. But that’s where I draw the line. One is — both are criminal, but one is a core attack on our democratic institutions. [Merrick Garland: Portland Riots May Not Be ‘Domestic Terrorism’ Because Courthouse Was Closed, by Joel Pollak, Breitbart, February 22, 2021]

Hawley also asked Garland "Do you believe that illegal entry at America's border should remain a crime?" The possible attorney general of the United States replied: "I just haven't thought about that question.”

The man who may be the highest law enforcement officer in the land doesn’t know whether illegal immigration should be a crime.

Sen. Mike Lee asked Garland his thoughts on Kristen Clarke, the nominee to lead the DOJ’s Civil Rights Division, and her past support for black supremacy. Garland said Clarke’s views on civil rights is in line with his and he has no problems with her.

Barack Obama pitched Garland as a “moderate” pick for the Supreme Court in 2016. His statements today showed Garland is anything but moderate. Every Republican and sensible Democrat should vote against his confirmation.