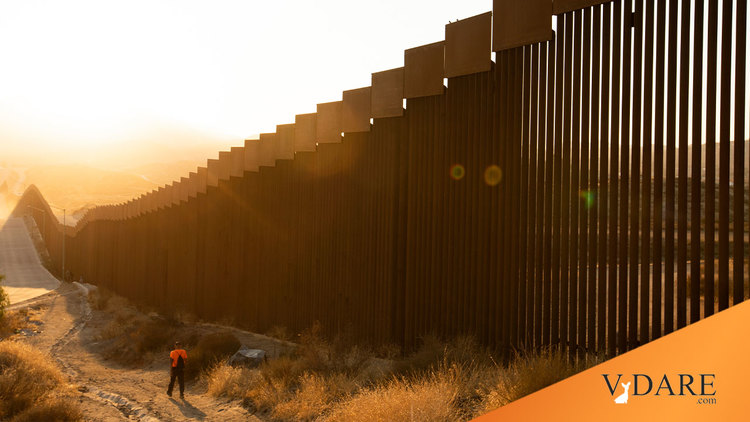 Mexican Illegal Hangs Herself From Border Wall After Multiple Crossings. Coyotes Left Her To Die

The coroner in Pima County, Arizona has released autopsy results on Griselda Verduzco Armenta, a 31-year-old Mexican illegal alien who inadvertently hanged herself on the barrier near Douglas, Arizona. Her death in early April will undoubtedly fuel more sob stories about the inhumanity of the border wall. But two things about the story are revealing. Verduzco had repeatedly crossed the border and returned to Mexico. And, like most “migrants,” she did not need asylum.

She “was found suspended from the border wall entrapped by a cord, tie-down straps and seat belt around her neck, chest and arms,” Fox News reported.

The report released this week said Verduzco Armenta had abrasions to the head, torso and extremities, along with contusions, a laceration on her lower right leg and a fractured vertebra, the Associated Press reported. The body also showed signs of attempts to revive her, according to the outlet.

And deep in The Guardian’s report we find two notable details. The woman had crossed the border and returned home several times, and she was not in any sense a “migrant” who could reasonably apply for asylum. She hoped to enter the country to find a job, as almost all “migrants” do.

Verduzco’s relative told Telemundo that the woman was raising a daughter who is about a year old and another aged nine.

The relative said Verduzco had attempted to cross the border into the US before, calling it “an obstinate dream” to make it into the country in hopes of finding a more secure future for her children. ...

“The coyotes tried and tried to get her down, but they couldn’t,” the relative said, without elaborating on how she got the information from the scene at the fence.

Forget the ridiculous claim that the coyotes left Verduzco there to keep her safe. The cousin also inadvertently reminded us that “migrants”—leftist code for illegal aliens—aren’t coming for asylum, but instead for jobs and money. They come “for a new life.” They openly admit it to leftist Mainstream Media activists.

Here is just one example:

Several thousand Honduran migrants moved this week through Guatemala, many heading to shelters in Guatemala City for food and rest before they continue on their journeys.

Among them is Karen Aviles. She hopes to reach the U.S. and find work to send money back home. pic.twitter.com/UjC0mK7hx5

In 2018, the National Center for Risk and Economic Analysis of Terrorism Events, housed at the University of Southern California, explained that surveys of illegals from the Northern Triangle— Guatemala, Honduras, and El Salvador—revealed just one reason leaving home:

For all three countries, the vast majority of migrants report economic incentives as the reason for migrating. In 2017, El Salvador had the largest fraction of respondents identifying violence as a motivation, but even there it was less than 20 percent.

Sorry to say it, but if Griselda Verduzco Armenta hadn’t foolishly been wandering thither and yon in the desert and illegally entering the country over a dangerously  high border wall, she would still be alive. And her kids would still have their Mom.

But that, of course, is not the lesson we’re supposed to learn.