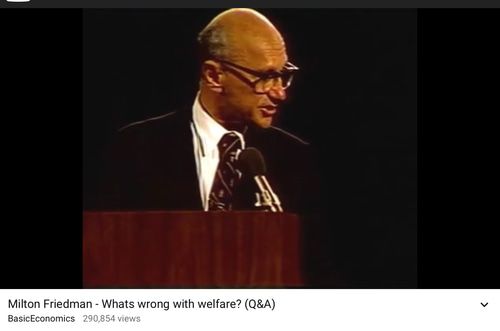 Long-time VDARE.com readers have it down pat that “It's just obvious you can't have free immigration and a welfare state."

It was said originally by Nobel Memorial laureate in economics Milton Friedman, and, in fact, he said it to VDARE.com founder Peter Brimelow in 1998, before VDARE.com existed.

(Unfortunately, the news doesn't seem to have reached Wikipedia.)

Interestingly, there's a video in YouTube space of Friedman addressing an audience of college students on "What's wrong with welfare?"  Its date isn't provided, but it could be several decades old.  (Friedman died in 2006.)  At about 13:10 into the video, while answering a question, Friedman says:

I was saying before, in answer to an earlier question, there's no magic number—30 percent, 25 percent, 40 percent—which a government can spend and tax while having a viable economy.  How much it can spend depends upon the other policies which it follows.  It depends also on the attitudes and structure of the people.  As I was saying, with a homogeneous people you can go much further than with a heterogeneous people."

Or as a friend in the fight to save Western civilization says, "Diversity is divisive."