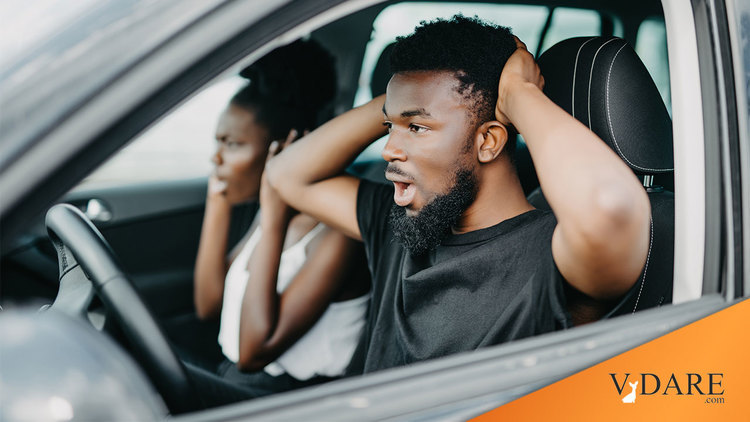 Earlier: "Racial Profiling" And Bad Black Drivers: Blacks Speed Twice As Much As Whites And "Speed At Reckless Levels Even More"

It’s time. Pass the George Floyd Amendment and just make it illegal to arrest black people who commit a crime.

Enough with the games. Enough with the idea law and order matter anymore (a white Democrat leader in Minneapolis called the burning of the Third Precinct a “revolutionary moment” and an “act of pure righteousness”).

It’s all about race, and what our elected officials can do to ensure our civilization races to the bottom in a complete abandonment of standards once governing civilized society when white people were in charge (and cared about promoting and protecting a civilization for their posterity).

Welcome to the future, where lawlessness is the norm, and any white person who notices the inanity and insanity of our elite is the true criminal.

MINNEAPOLIS (WCCO) — Minneapolis police will no longer be pulling drivers over for minor offenses, such as items dangling from a rearview mirror or not having a working license plate light.

Police Chief Medaria Arradondo wrote in the memo Thursday that the change is an attempt to better utilize time, resources and operational effectiveness.

“By prioritizing the more serious traffic violations and no longer conducting routine traffic stops on the lesser violations mentioned above where it’s the only offense, it will have minimal impact on current MPD traffic enforcement and can also help build trust with the communities we serve,” Arradondo wrote.

“I believe this is a positive development. I would like to see more,” said Teresa Nelson, legal director for the American Civil Liberties Union of Minnesota. Nelson said traffic stops for low level offenses often involve people of color.

“The community has been asking for this for several years. There is data that show these stops have significant racial disparities and they destroy the relationship between police and community,” said Nelson.

Those critical of police tactics have been pushing for changes going back to the fatal police shooting of Philando Castile in Falcon Heights in 2016. Critics continued that push in April after the police shooting of Daunte Wright in Brooklyn Center.

City leaders also believe the changes will help strengthen relationships between Minneapolis police and the community.

Nelson said she would like to see the changes go further, such as not pulling people over for loud mufflers or equipment violations.

“We ask police to do so many things. We’re hearing that police in Minneapolis are overworked and there’s not enough and they don’t have enough resources. And so why would we be focusing on offenses that don’t have any link to public safety,” said Nelson. “There are a number of cities that are shifting to civilian traffic enforcement and I think that’s something else the city should explore.”

In his memo, Chief Arradondo said the city attorney’s office will also stop prosecuting suspended license tickets, if the only reason for the suspension was a failure to pay a fine, and there was no other egregious behavior that would impact public safety.

On Twitter, Mayor Jacob Frey responded to the policy changes by saying, “Our team has been working with community and the MPD on reforms to traffic enforcement. We will soon end stops solely for offenses like expired tabs or items dangling from a mirror. Another concrete change moving us in the right direction.”

The end game of Black Lives Matter and affiliated causes is to push to make it illegal to arrest black people who engage in criminal acts.

Thus, the absurdity of the concept of Black-Run America (BRA) has nearly come to fruition.

We are living in a real-life horror film, and unfortunately there’s no getting off this ride.