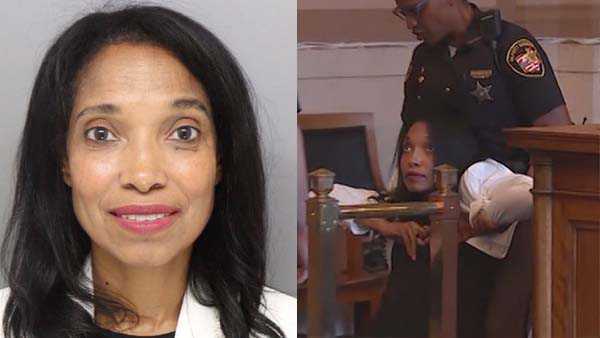 After black judge Tracie Collins was sentenced for massive corruption in Ohio, she had to be dragged out of court.

It was turmoil and chaos in the Cincinnati courtroom following the sentencing of former Hamilton County Juvenile Court judge Tracie Hunter’s [sic] to six months in jail. Hunter had to literally be dragged out of the room to begin serving her sentence while more than two dozen supporters howled and wailed. One of those supporters tried to jump the railing and was stopped by officers and led away in handcuffs.

The bizarre scene was clearly not unexpected since there were at least 10 law enforcement officers immediately reacting to the bedlam, preventing the situation from getting totally out of control.

Then a mob of her supporters protested outside the Judge's home.


Judge Dinkelacker: "I have never seen anything like this, over a lot of years, a lot of cases. And there have been cases with race issues, like this one."https://t.co/hLoz8WkuFf

The Judge insisted on protesting that he wasn't racist. Although there are number of statutes protecting Judges from this kind of thing, it's not clear that any of the "protesters" will be charged.

The discord did not end with Hunter being taken away from the courthouse. Following Monday’s courtroom disruption, dozens of Hunter’s supporters showed up at the home of Judge Patrick Dinkelacker who imposed the sentence. “Hey, hey, ho, ho, this racist judge has to go,” they chanted Monday night as they marched on the street, according to Cincinnati.com. They also yelled, “Black lives matter” and “No, justice, no peace.”

“I have never seen anything like this, over a lot of years, a lot of cases,” an upset Dinkelacker told The Enquirer from his home while the protests there went on. “And there have been cases with race issues, like this one.” He insisted that he is not a racist. “I would like to have them find one person who would say Pat Dinkelacker is a racist; they won’t because I was not raised that way and it’s not true.”

“It’s starting to get to me,” he admitted.

About the protest Monday night at Dinkelacker’s home, county prosecutor Deters said it was “out of line,” adding that tracking a judge to their home is believed to be an unprecedented move in Hamilton County.

“Good-hearted people don’t do this,” he said.

We've referred to mobs of this kind as "turbas" after the Sandinista turbas divinas of Nicaragua in the '80s. The point is that the mob gets the support, implicit or explicit, of elements of the government. Corrupt black ex-Judge Hunter has the support of (former) Cincinnati Mayor Mark Mallory.

Just in: Mayor Mark Mallory: "Tracie Hunter spending six months in jail serves no public purpose. She was severely punished when she was forced out of her judgeship. The images of her being dragged from the courtroom are as disturbing as the injustice she has experienced." pic.twitter.com/Q9F4ypet0i

Of course, Hunter had to be dragged out of court because she refused to go. She's a criminal. This is ex-Mayor Mallory.

This kind of mob has attacked Kris Kobach, Eric Cantor (a complete sell-out on immigration, but still a Republican), the US Congress, candidate Donald Trump in 2016, Ann Coulter and Tucker Carlson.

It needs to be stopped.